Happy Friday! Welcome to Issue 57 of Rerun, your weekly digest of digital storytelling, interactive media and the future of TV curated by Axonista.

We bring you old technologies repurposed with streaming enabled vintage TVs, as well as new ones, with Ralph Lauren’s connected store fitting rooms and reports of the upcoming HDR TV wars. And in VR news, we finally have a decent VR ad and some classic children’s stories in animated VR.

Live video on social networks will undoubtedly feature prominently in a post television world. But what will it look like and how will it be used?

Jan Dawson, chief analyst at technology research firm Jackdaw looks at the challenges of live video, matching the broadcast with an appropriate and available audience.

The big challenge with live video is that it requires the serendipitous pairing in real time of a broadcaster with something to show and an audience that’s ready and interested in what’s being shown. Unlike the more typical asynchronous video we’re used to seeing online, to be really effective, live video needs to be consumed in the moment.

HuffPost Tech's Cathy Hackl looks at how this intimate and raw format can empower new types of content creator and transform how news content is disseminated.

Buzzfeed once again showed its mastery of content and timing in a Facebook Live experiment last week. With no prior marketing they amassed over 2.8m views and 800,000 peak concurrent viewers on a live stream that lasted almost 45 minutes. The content? Two Buzzfeed employees methodically wrapped elastic bands around a watermelon and viewers patiently waited until it exploded.

TV execs were quick to point out the reasons why this isn't the future of TV, and how it's not fair to compare Facebook's metrics to more traditionally measured ones, but we think they're kinda missing the point. The point being that Facebook has a waiting audience of 1.6bn users who go to the platform several times a day looking for a distraction, and that content can spread insanely quickly among them. This was really a demonstration of the audience reach of Facebook Live more than a stab at the future of TV.

Both Netflix and Amazon Prime have already rolled out HDR content and Netflix may even use this as a way of creating tiered subscription prices. TV manufacturers are also supporting HDR and most new TVs will be HDR enabled.

So, why pay attention to HDR above, say, 4K? As this article suggests, because HDR looks amazing and offers more noticeable image quality than 4K. But, as always, there's competition over which specific HDR format will win out and this article offers a good guide for the consumer.

Freebooting has been a hot topic for Facebook over the past year, as content creators and publishers demand a way to curb the practice, which causes them to lose out on valuable views and monetisation.

To address freebooting, Facebook have announced the release of Rights Manager, an admin tool that helps video owners find copies of their content across Facebook. The owners can have copies automatically flagged for removal or have a message sent to the freebooter requesting video takedown.

Even live videos can be monitored, which could help prevent live streaming of exclusive paid content, a problem Periscope encountered last year. 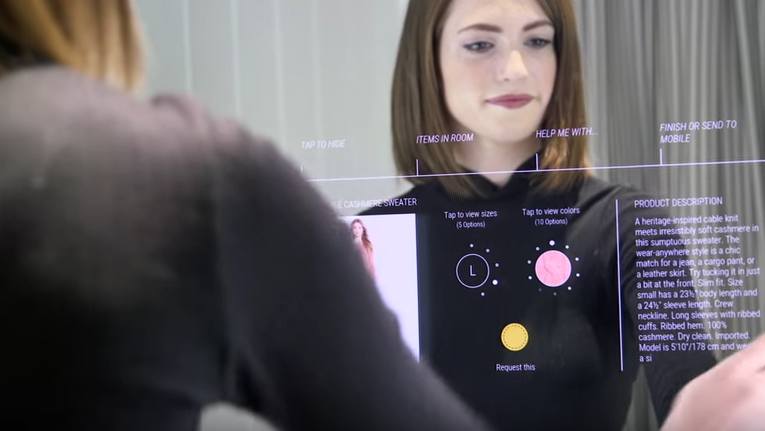 Ralph Lauren has brought a smart interactive mirror to its stores with the customer experience at the heart of its design. It removes friction from the purchasing process and sends valuable conversion rate information to the store's sales team.

Oak Lab’s fitting room mirrors use RFID technology to recognize the items a customer has brought in with them, rendering the products on the screen. The mirrors show other available sizes and colors for each item, as well as recommended products based on what you’ve brought in. A “call an associate” button connects to a salesperson’s tablet on the floor to call them to the fitting room. Other features like different lighting settings and language options help flesh out the brand experience.

With mobile video growing, it’s more urgent for brands and marketers to figure out the best way of holding the attention of viewers. The banner ad and pre-roll videos have dominated mobile, but they’re more a legacy of traditional advertising.

So it’s no surprise that this new whitepaper, issued by Exponential Interactive, has found that interactive ads like 360 degree videos are more effective at holding attention. They exploit the best of video, making ads not just something that interferes with watching video, but a worthwhile and fun experience in and of themselves.

Finally someone has figured out how to show in a normal video what it's like to be in VR. No people looking open mouthed around their living rooms, no awkward side-by-side footage, and no wide-angle footage that looks just like the video games we're already used to. Take a bow, SteamVR.

At Tribeca, this little VR match girl put Penrose on the map

'Allumette' is the second VR animated short by Penrose Studios, founded by Eugene Chung, former head of film and media at Oculus VR.

Based on the popular Hans Christian Andersen tale 'The Little Match Girl', this animation taps into childhood imagination. It seems that this is a first step in creating a much bigger VR world in which lots of stories can take place.

"The way we categorize our projects internally is by worlds, [rather] than by stories within those worlds," says Chung. The idea behind this thinking is that it'll allow Penrose to get VR viewers familiar with its characters and worlds, and then invite them back to experience new installments featuring characters old and new.

Get your vintage TV to stream video

We'd think that televisions from the 1970s were pretty much obsolete and only good as vintage furniture, but one inventive YouTuber has turned his 1978 GE TV set into a video streamer. Perhaps too big a project for most, but for those fans of all things retro, a perfect way to combine vintage design with contemporary technology.