Happy Friday! Welcome to Issue 54 of Rerun, your weekly digest of digital storytelling, interactive media and the future of TV curated by Axonista.

In this week’s Top Pick, we have our own news! The announcement of Ediflo Pro, the first platform to be engineered from the ground up for Object Based Broadcasting (OBB) workflows.

The battle for TV and video streaming continues with the launch of YouTube Connect, Google and Vizio ditching the TV remote, and Apple Music making original video content. Elsewhere, we look at some of the ways that VR will shape our lives, from our behaviour and empathy to how we design our homes or learn about the world.

Object based broadcasting (OBB) is something the TV industry is going to hear a lot about this year. At Axonista, we're delighted to announce Ediflo Pro, the first platform to be engineered from the ground up for OBB workflows.

As content shifts from the main screen in the living room to personal touchscreen and smart devices, there is a huge opportunity for broadcasters to innovate by creating new viewing experiences, tailored to these devices.

With traditional broadcasting, any captions or graphical elements of the picture are baked into the video. Axonista’s technology allows these elements to be delivered separately as data to the device. This enables the device to display a clean video feed, then overlay the graphical elements as native UI.

For smaller devices the captions can be applied in a way that makes them more readable and critically, on touch devices, graphics can be made into tappable interface elements. This enables news tickers to become rewindable, tweets to become retweetable, sports tables to be interacted with, and products to have buy buttons. 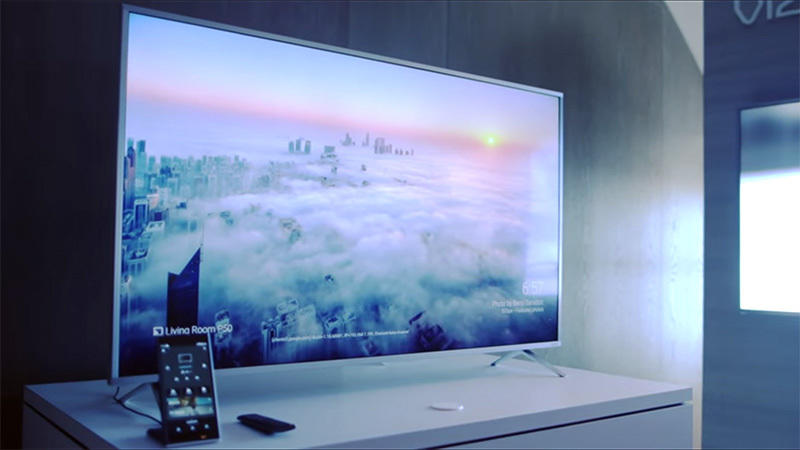 This is an all-out smart TV platform war, and a lot of people are going to suffer through a lot of badly-ported and hastily designed apps before it’s all over.

It takes at least two hands to count the number of platforms vying to take control of the TV in your living room. Vizio, who sell more TVs in America than any other company, have decided to bypass that whole platform war entirely. Their solution? The remote that comes with your TV is now a small Android tablet, and they have been working closely with Google to ensure that Google Cast works better with Vizio than anyone else.

Why is this clever? Well Vizio's platform is now the entire set of apps that already exist on Android phones and tablets. It's not just a better experience for viewers, it's a smart business move that could see them cement their position at the top of the TV market.

Facebook and Twitter are rumoured to be in the market to buy live TV rights, and with deep pockets, access to celebrity talent, and the ability to instantly live stream to millions, why wouldn't they?

According to Digiday, UK broadcasters and brands are using Facebook's live video streaming technology to do things like host audience Q&A sessions, break news and report live. While these low-fi live streams are reaching considerable audiences, who really owns the content?

Meerkat might be stepping back from it, but Google is now taking to live streaming with its app featuring content from YouTube subscribers and channels. It's called YouTube Connect and seems to offer much of what Facebook Live and Periscope already do but, unlike the others, it has an existing bank of content, stars and subscribers.

Last month T-Mobile launched Binge On, a service allowing mobile users to stream video without using up their data allowance - a huge incentive for users. The catch was that it compressed videos- something that YouTube took issue with. Now, it seems, YouTube and T-Mobile have reached an agreement, with YouTube now available on the service.

T-Mobile has been gaining ground in mobile video. Recently Netflix were discovered to be providing lower-quality streams to AT&T and Verizon, with T-Mobile getting a higher quality cap..

Data goes to the movies

It's hardly news that film has undergone datafication, particularly in terms of the move from analogue to digital production and distribution. But, as this article points out, datafication goes much further than this: not only with data analysis used to predict audience preferences, but even using computer programmes to determine successful plots or how much money will be returned at the box office.

Apple seems to be getting into TV, but through Apple Music rather than Apple TV. Following recent reports of a Dr. Dre TV drama, we now have news that Apple is not only working with Vice to produce short music documentary series, but also with Will.i.am to produce a show about apps. Although this might seem out of left field, it's not too big a surprise given Tim Cook's announcement that the future of TV is apps.

Why you should try that crazy VR headset

For now, all of this hardware is more Apple II than iMac. It’s still the very early days.

The early days of a new technology are by far the most exciting. Compare iPhone announcements from eight years ago to today! In the early days it feels like anything is possible, like our imaginations are on fire. That's where VR is right now.

With VR though, anything is possible. It's fantastical, profoundly immersive and real. This article by the Washington Post is full of VR experiences and applications that even a year ago were just in someone's imagination. If you haven't tried VR yet, this could help tip you over the edge. You will buy a VR headset one day.

VR: Do you have the space for it?

Okay. So you've committed to VR and now are the proud owner of your own VR system. Now, where to put it? This article raises some of the post-purchase logistical considerations for VR users, namely how to incorporate into your home.

Not to fear, HTC is on the case! And it has produced not only a comprehensive manual, but a lovely series of gifs demonstrating how to set it up in your living room or study.

We've seen some strange VR and 360 degree videos here at Rerun, from VR acid trips to haunted forests. But this is up there with them: Danny Trejo, of Machete fame, serving and eating tacos at his Trejo's Tacos restaurant. Really, that's it!