Happy Friday! Welcome to Issue 33 of Rerun, your weekly digest of digital storytelling, interactive media and the future of TV curated by Axonista.

This week's Top Pick is an insightful review of CNN's live VR broadcast of the Democratic Debate, in addition to a retrospective from a NextVR employee who worked with CNN on the broadcast. Both fantastic reads for anyone interested in the cutting edge of VR broadcasting!

We also have Facebook's plans for a dedicated video tab in their mobile apps, Twitter's TV strategy, the Netflix for indie film, a Mipcom roundup, VR cover girls, a VR theme park, amazing UI motion graphics in The Martian, and much more!

I failed to watch the entire Democratic Debate in VR

The broadcast was fascinating as an experiment in virtual reality broadcasting, but it was defined more by its limitations than its advantages. - Ben Kuchera, Polygon

In a review of his experience of CNN's live VR broadcast of the Democratic Debate, Ben Kuchera expresses that the negatives he encountered outweighed the positives, due to quality limitations on hardware and a sense of isolation from within the headset. Despite the excitement of having an intimate view of the candidates' body language, Kuchera missed the nuances in facial expressions that weren't clear on the screen. The part of the debate experience that he missed most, while immersed in VR, was the inability to communicate with his wife who sat beside him on the couch, and missing out on the Twitter conversations, as it was not possible to tweet from within the headset. When Kuchera's phone battery died, he had to stream the last 40 minutes on his laptop to which he said " It was a relief."

Live VR streaming is not quite ready, the limitations are many but at Rerun, we admire the VR pioneers and the broadcaster's ambition to disrupt TV. Helen Situ, of NextVR, who worked with CNN on the broadcast, outlines what they learned from the first-ever live VR news broadcast and their awareness of the current limitations of the medium.

As we wait for the hardware to catch up, we have to question what genres VR will work well within. The debate is a socially interactive experience and the medium of VR is currently too isolating. Without the ability to communicate with others in the immersive experience, are we giving the audience what they want? 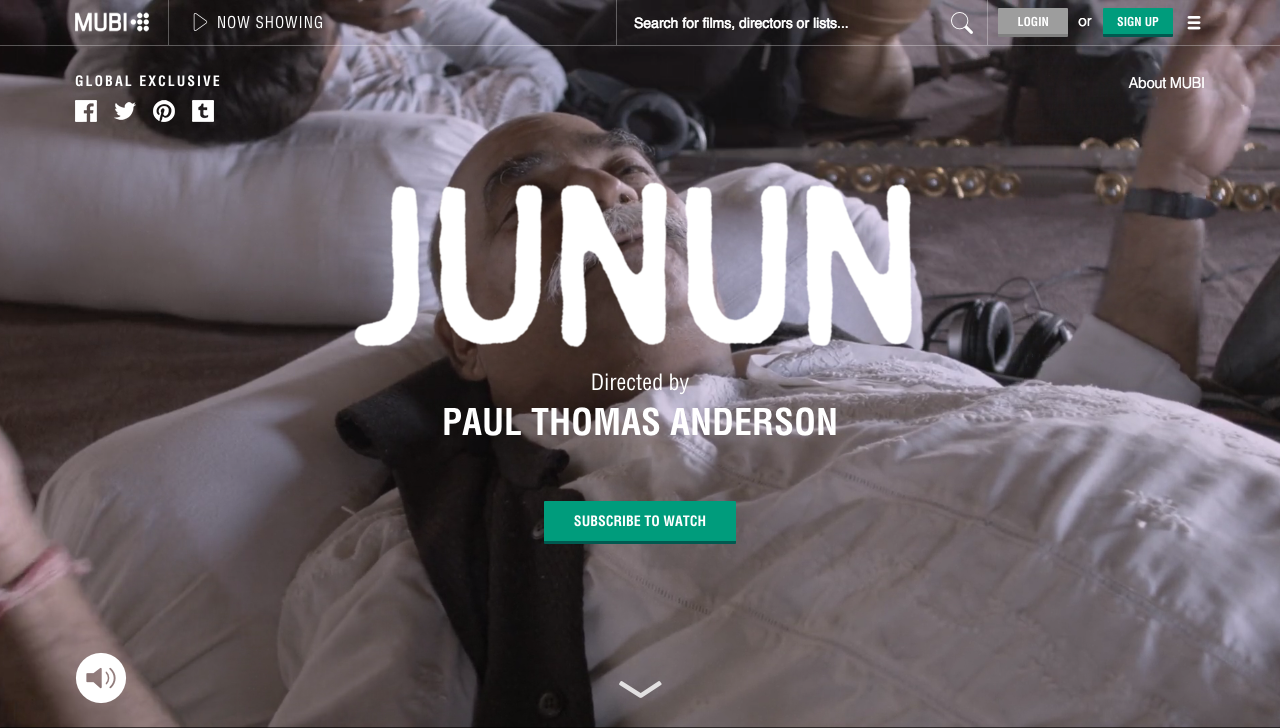 How a small streaming site became the Netflix for indie film

Streaming site MUBI has been streaming movies online for eight years now, almost exactly the same length of time as Netflix, but with a radically different approach. While Netflix offers a massive content library and computer-generated recommendations, MUBI offers only 30 human-curated movies at any given time, with a new one added each day. With this approach they've cultivated an audience of passionate, discerning viewers, and a reputation as trusted advisors.

"I know that they're not for everyone," MUBI CEO Cakarel says of their selection of films. "Netflix is trying to be for everyone. They are going after 70 percent of households, I'm going for ten. But I can really satisfy that ten."

The social network says it is testing a “dedicated place on Facebook for people to go when they exclusively want to watch video,” which will help “people discover, watch and share videos on Facebook that are relevant to them.” Just like you can do on YouTube, the world’s biggest video site.

Facebook's approach to content discovery for this as yet unnamed feature, (may we suggest FaceTube?) is likely to be a personalised video feed, based on clips saved, watched or forwarded by friends, combined with trending current events served by Facebook.

Despite some terrible flooding, the annual TV content show MIPCOM went ahead as planned in Cannes last week, attracting international production companies, show producers and TV networks. Although the conference mainly deals with content production and distribution, there were some notable keynotes on the agenda from technology companies including AOL and Twitter.

This round up by The Guardian's Stuart Dredge covers the technology themes that bubbled to the surface during the conference. It's a great reflection of where the wider broadcast industry stands on Social TV, creating for digital natives, VR and TV apps.

“For us as an industry, and particularly for us as content creators, we have never had it so good. Maybe TV was a little late in coming to the digital party, but let’s face it, it wouldn’t be a good party without us.” Sophie Turner Laing, Endemol Shine

Last week we featured Facebook's plans to woo TV broadcasters. This week it's time for Twitter. TV has been a big focus for them over the past year, and they're now up to 370 years of video watched a day on the platform. Some of their plays include native video, the acquisition of Periscope, increased focus on upping actor/celebrity engagement and last week's release of Moments. This article by The Guardian is a great in-depth overview.

While it seems like everyone else is getting into making original content, Snapchat is ditching its own originals channel on its Discover platform.

It is possible that it's simply no longer needed, serving as a demo channel to attract big brands to the platform. Discovery partners include ESPN, Cosmopolitan, Comedy Central and Vice. Cosmopolitan, which has been a partner since the service launched in January, has seen traffic grow from about 1.8 million a day to 3 million daily viewers since the summer.

This move could indicate that Snapchat has figured out a strong value proposition for partners, and will focus its efforts on attracting even more big name brands with pre-built audiences to its Discover platform.

VR gets its first cover girl, and hints at how commerce might work

Drew Barrymore is hailed the first VR Cover Girl, with InStyle's launch of the first virtual reality magazine cover. VR viewers will be rewarded with an immersive behind the scenes experience of the cover photoshoot, where they can see Barrymore in a close setting, the brands she wears and watch make up tutorials.

InStyle teamed with Jaunt, a cinematic virtual reality studio, to create the immersive experience with a view on enhancing interactivity to include shoppable capabilities in the future.

If you stare at an object, it will trigger a reaction that will be a floating icon — here’s where you can order that sweater. - Scott Broock, VP of Content Jaunt

The InStyle brand intends to wield VR to create an emotional connection with their audience through intimate, immersive and interactive experiences.

Stepping into The Void, the worlds first VR theme park

The Void is a new virtual reality theme park which will open to the public in Pleasant Grove, Utah. It creates an “immersive, out of this world experience” and unlike traditional theme parks where users are strapped into vehicles or chairs, The Void will allow people to explore the virtual world freely. Users can teleport, ride on moving platforms and turn corners to reveal a completely different world. Sounds awesome!

Microsoft has recently been experimenting with multi-user technology within virtual reality and we wonder if this will come into play in situations like The Void theme park in order for users to interact with each other.

The amazing UI in The Martian

The Martian is a fantastic film (if you haven't seen it yet, fix that asap) that's chock full of amazing UI. Nearly every location in the movie is kitted out with screens huge and small, forming the backdrop to the drama unfolding in front of them. Territory Studio actually worked closely with NASA for the film, and 400+ screens are based on the real thing, then crafted for storytelling and amped up for visual awesomeness. Fans of sci-fi, design and motion graphics need to check this gallery out.