This was a week for content and programming. We've got an excellent Upfronts roundup, a couple of announcements from Facebook on original content and live sports, and a great read on Netflix's war on cinema.

Facebook is using the same approach it used to kickstart its live streaming video product , i.e. throwing massive heaps of cash at it, in order to build a slate of original long and short form programming for its video tab.

Variety reports that production partnerships are in place with Vox Media, BuzzFeed, ATTN, and Group Nine Media, with rumours of more announcements at Cannes Lions next month. This is a story to keep watching.

A Guardian investigation has revealed for the first time the secret rule book Facebook uses to moderate issues such as violence, hate speech, terrorism etc.

At Rerun, we think that given the scale of Facebook, its role as a global censor should be considered carefully. Its moderation guidelines highlight that not all disagreeable or disturbing content merits removal. While some remarks and videos it allows may be extreme the Facebook Files reveal that users commonly express threatening behaviour or violence in casual ways. But for some users such content merits removal.

This leaves us wondering if global social networks can be safe places for everyone? Perhaps for such reasons, smaller, more localised networks, like WhatsApp groups and messengers are the social networks of the future. 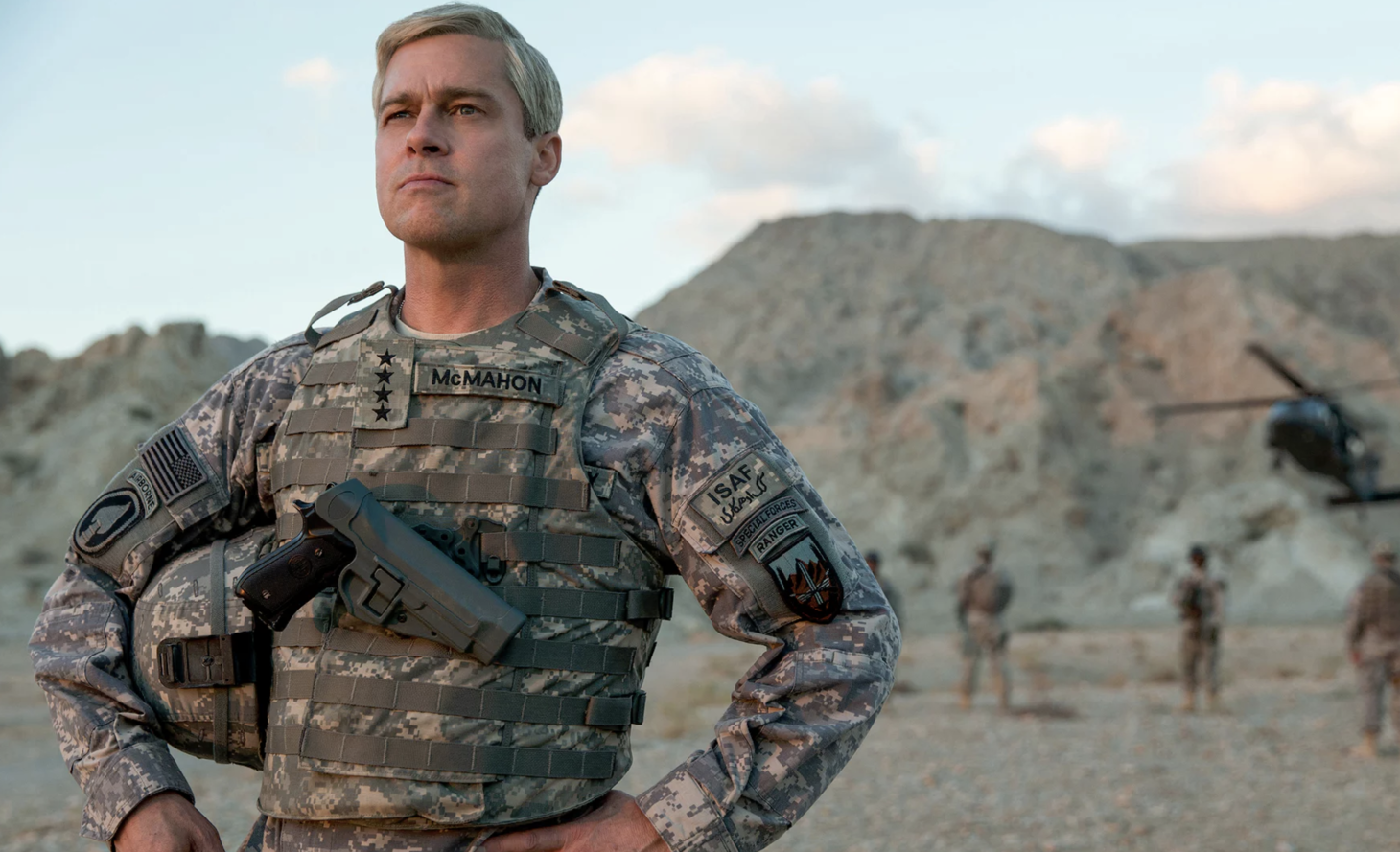 Send in Brad Pitt: Netflix gets out the big guns as it declares war on cinema

Has Netflix been backed into a corner?

Important sections of the film industry, as highlighted at Cannes, have not been overly receptive to Netflix's distribution model. From next year, the film festival will insist that all Palme d’Or contenders must be released in French cinemas, in line with French law. This effectively bars Netflix from competition. French law insists that a film must be cinematically released 3 years before a digital release takes place in France. Netflix coincide cinematic and digital release.

In anticipation of such aversion Netflix has teamed up with the likes of Brad Pitt to make unusual and unlikely studio films that will draw audiences - films that studios might consider too risky. At Rerun, we think that this isn't too risky for Netflix. It has important knowledge born from data captured from user viewing habits. It knows the type of stories its audience want to watch. And instead of waiting for awards to validate its content, Netflix lets the user tell them what's good or not.

Backed into a corner? No, we reckon it's leading the pack. 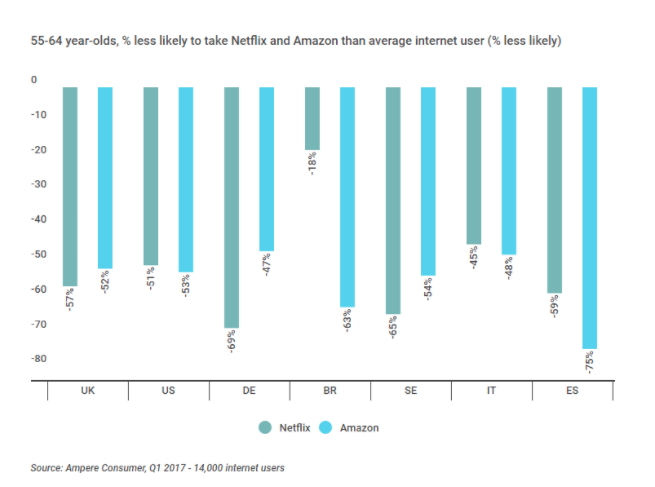 A recent study from Ampere Analysis has showed that audiences between the ages of 55-64 may be an untapped market.

While, as the research shows, this 55-64 age group own smart TVs, they almost exclusively watch content on TVs rather than on mobile devices and tablets, where on demand services have captured younger audiences. This could possibility be due to a lack of knowledge in the use of such technology.

However the research also highlights that current affairs, news, documentaries etc. are the genres of choice for older viewers, while younger audiences prefer fantasy and science fiction. This could be an area of potential growth for the likes of Netflix and Amazon.

Facebook will stream 20 MLB games for free this season

While Facebook's Sports Stadium offering it launched early last year was all sorts of meh, it is about to make a real splash in the live sports TV game by streaming 20 MLB games for free to its US audience, starting today.

The race between Amazon, Twitter and Facebook to become the next global sports broadcaster is on. Facebook Live's new social chat features announced this week enable viewers to hold private group chats around the live video stream, and hint at a future where live sports is a cornerstone of Facebook TV.

This year's Upfronts is now over, and The Ringer has taken stock of the programming that all the major U.S. networks have planned for the coming year. A couple of the several broad themes covered:

CED Magazine reports that Comcast, unlike other US cable companies, is increasing its video subscriber numbers, with 42,000 new subs added in Q1 2017.

So what is Comcast doing that's setting them apart from the competition?

Comcast has been better at avoiding the “skinny-bundle trap,” which the firm defines as the race to the bottom in price and selection to save subscribers without understanding the long-term consequences of such a tactic.

At Rerun, we think that Comcast is redefining itself through innovation, and definitely part of the future of TV.

Esports are big, but VR gaming events might take things to the next level

The rise of Esports tournaments and the increased sponsorship coming from blue-chip tech and broadcast companies is something we’ve covered in Rerun. However, it looks like VR gaming events are giving Esports competition of its own.

In a feature for Mashable, Adario Strange put his VR gaming skills to the test during the first national VR Esports tournament in the U.S., presided over by the ESL Gaming Network, Insomniac Games, Microsoft, Intel, and Asus.

Most pertinently, Strange identifies spectacle and physicality as the key differences between Esports and VR events by questioning if “...the more physical nature of VR Esports be the key to the emerging platform's success in the gaming arena?“

As seems to be a trend with many VR ventures, expensive hardware overheads remain a roadblock for less financially endowed outlets to set up events, with Strange citing a rough cost of $1,200 to set up an Oculus Rift gaming system.

With VR finding increasing usage outside of gaming and entertainment in such sectors as education and training, it was probably only a matter of time that payments found a way into the medium.

Enter Worldpay, the London-based payments processor, which is currently developing and investigating how it could handle debit and credit card transactions in virtual reality.

VentureBeat’s Paul Sawers acknowledges that while VR still isn’t a mainstream platform, companies are still developing ways to monetize VR should it break into the mainstream. 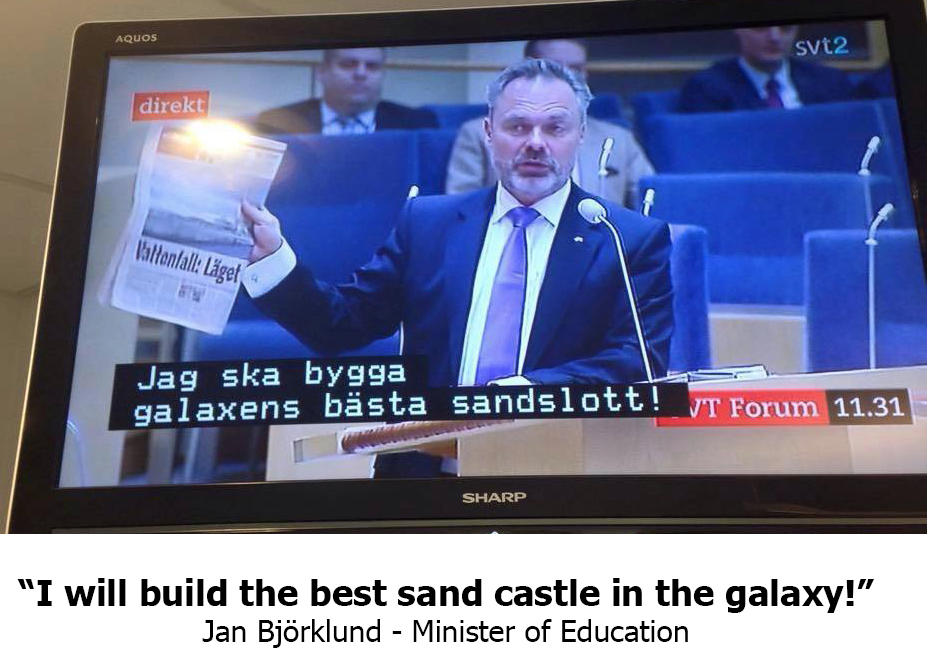 Viewers of this political debate in Sweden got a surprise when, according to the subtitles, their Minister for the Environment welcomed everybody by saying “Greetings, earth creature”. Things only got weirder and more hilarious from there, as the mistakenly added subtitles from the kid's TV show matched up incredibly well!