This week, Facebook revealed it has partnered with ESL to live stream video game tournaments. As part of the deal, Facebook will host a weekly show dedicated to highlights and interviews with players from the tournaments!

How AR & VR will change the news

You'd be forgiven for thinking the above words were uttered in 2016 in relation to VR & AR storytelling. However, they were actually said 80 years earlier in 1936 by singer Dinah Shore, who had just appeared on TV and didn't think much of it. Shore had to wear green makeup and black lipstick due to the trouble early televisions had with the colour white.

What's the point of that historical fact? Simply to illustrate that you can't judge a medium by its present-day limitations. In the case of news, which is intrinsically entwined with storytelling, looking past the current accessibility and price problems of VR & AR reveals a whole new world of possibilities. This article by Scottie Gardonio will take you into the past, and then the future, of news.

"Pre-Vietnam, war was largely glamorized. When technology of the day allowed for better live coverage of events happening in war zones, this once-glorified idea was thrown into viewer’s faces for what it really was — horrific. This mindset transformation was a result of transparency. The military could no longer hide the truth from the public. In the same way, AR/VR will do this for the news."

The Digital Single Market strategy is a set of proposals that covers three main areas where the EU as a whole should take action:

...to develop the European Data Economy to its full potential; to protect Europe by tackling cybersecurity challenges; and to promote online platforms as responsible players of a fair internet ecosystem.

Most importantly the Digital Single Market strategy calls for the portability of content, so that Europeans can travel with video content to which they subscribed to at home. At Rerun, we think this could help break down rights barriers which would be exciting for content creators, platforms and viewers!

Comcast’s Strauss: ‘We’re more like Apple or Google than a cable company’

Comcast is not a cable company; not anymore, according to Matthew Strauss, it's Executive Vice President.

Comcast now sees itself as a technology and communication-entertainment company shaping the new world of TV. Its partnership with Techstars and NBCUniversal LIFT Labs Accelerator is testament to its innovation. Through this partnership it hopes support startups focusing on new advancements in media, entertainment and connectivity. Comcast has also made significant investment in digital TV platforms, such as Hulu and WatchWith.

“Any piece of glass that can render video securely is a TV,” Strauss added. “When you look at it through that lens, you start to see the world differently around the all the different types of applications and places that you can now make video available.'

At Rerun, we think Comcast is an excellent example of a company that realised a change was necessary to retain market share and remain relevant in the ever-changing landscape of TV and media.

The new Android TV home screen has the right ideas, but it's probably not enough

Fresh from Google I/O, The Verge takes a look at the newest iteration of Android TV. On first glance it's clear that the new 'home screen' has bags of potential. Rather than simply presenting the viewer with a grid of apps, the new layout surfaces in-app content directly into channels on the home screen. You can browse through channels and apps you've installed, building your 'watch later' list as you go, all without opening a single app. It also has Google Assistant built-in.

One potential snag though; it needs app makers to buy-in.

Cheddar is a self-described 'post-cable network' that went all-in on live streaming. It's broadcast daily from the floor of the New York Stock Exchange, with exclusive CEO and founder interviews, and profiles of the technologies and companies transforming our lives. Today it boasts an audience of over 1 million live viewers daily across a plethora of platforms, including Twitter, Sling TV, Amazon, Cheddar apps, five operated HD broadcast stations, Pluto TV, Vimeo, and Facebook.

While the network has a decent audience of 'millennials', with 8.4 hours watched a month on average and 62% of viewers watching every week, what strikes us is the affluence of that audience. 30% of Cheddar's audience has a net worth in excess of $500,000!

How Pixar lost its way

Is the golden age of Pixar over? One could be forgiven of thinking so. Since Disney's take over of Pixar, Pixar's production of successful original titles has diminished. Pixar has instead released a slate of mediocre sequels.

At Rerun we hope that Pixar delivers on its promise to focus on original features, after its current slate of sequels ends. Ed Catmull, the president of Pixar, stated in his 2014 book ' Creativity, Inc.' that sequels can represent 'a sort of creative bankruptcy', and he argued that if Pixar were only to produce sequels, it could 'wither and die'. And a world without Pixar, is not a place we want to think of.

Reports from Google’s annual I/O developer conference in Mountain View, California are always tinged with a feeling of “where will they go next?” and this year’s conference was no exception.

Setting out its stall on VR and AR, Google announced standalone VR headsets to rival Oculus Rift, HTC Vive despite competition from VR platforms such as Facebook’s, MIcrosoft’s HoloLens and HTC’s Vive. What’s more, the announcement of its Tango-based Visual Positioning Service (VPS), essentially an indoor GPS system, is proof in the pudding of how seriously the company is developing AR experiences.

So just how will Google distinguish itself from the competition? Leslie D'Monte of Livemint reports that not only is Google seeking to develop standalone headsets that do not require a phone or a PC, it’s also attempting to focus VR and AR experiences towards sectors outside of entertainment gaming. Clay Bavor, vice-president, Virtual and Augmented Reality, at Google, cited Google Expeditions, a VR experience for students but controlled and delivered by the teacher, as an example of how Google aims to develop VR and AR experiences for educational purposes. 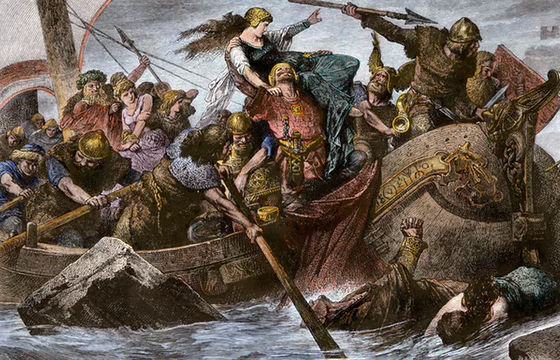 Major museums and galleries the world over have been delivering interactive experiences for visitors. However, the Yorkshire Museum, in partnership with the British Museum, is taking it once step further with a groundbreaking virtual reality project that might find itself as the standard for historical and educational VR experiences.

The VR experience presents users with an immersive reproduction of life on the site of a Viking winter camp on the river Trent at Torksey, Lincolnshire in the year 865 AD. Extensive work and research, pieced together by historians and archaeologists, has created a camp experience where boats and weaponry are patched up, and objects like jewellery and clothes are made for trade as Vikings raid the English coastline.

The virtual reality exhibition will feature alongside prized exhibits from the British Museum and Yorkshire Museum’s collections.

A brand and innovation consultancy, Saffron, have published a beautiful collection of their recent work with YouTube. The resulting work includes a refined YouTube logo, a new typeface (aptly named 'YouTube Sans'), and plenty of brand applications. You can see it in action in the newly-launched YouTube TV.