Happy Friday! Welcome to Issue 31 of Rerun, your weekly digest of digital storytelling, interactive media and the future of TV curated by Axonista. Our top pick this week comes from Rerun's own Claire McHugh and is about the rise of binge viewing and the death of water cooler moments. We also have news about Facebook's new video profile pic, the new Chromecast, a US presidential debate livestreamed in VR and much more!

Binge viewing: Is it good for us? ... or 'Did Netflix kill the water cooler?'

The video revolution on Facebook continues with the addition of short video profile pictures. While similar to Snapchat's gif-like avatars, Facebook is going quality-first and featuring your profile photo (or video) much more prominently. Think of the animated photos in the Harry Potter films! It will no doubt give brands, personalities and of course regular users a lot more room for expression.

Google made some announcements at its hardware event on Tuesday that hint at a more committed approach to TV. Two new Chromecast devices are on the way just in time to provide some healthy competition for their neighbours down the road in Cupertino.

One is an upgrade to the existing device that beefs up processing capability. The other, Chromecast Audio, is an audio-only streamer that plugs into speakers and represents a lower cost option for those just interested in casting music.

Both devices have a new circular industrial design and will be deeply tied to Android mobile devices with new features available in Android 6 giving users more complete control over their home entertainment through their phone or tablet.

How NowThis got 15 million views off a Bernie Sanders interview

NowThis is a news startup/broadcaster that publishes bite-sized content tailored specifically to various social media platforms. They recently scored a video interview with U.S. presidential hopeful Bernie Sanders, and rather than go the traditional route, they broke the interview into small clips depending on the platform they were intended for. It became the first ever cross-platform interview of a presidential candidate, and has racked up over 15 million views so far. This article is a great read for anyone interested in the future of news broadcasting.

Bust out your log fire screen savers, Netflix has just made a VR app that transports you to a virtual living room. Allegedly even better than the real thing!
John Carmack, CTO of Oculus, worked with Netflix in order to bring the app together and wrote about the process on the Netflix Tech blog.

There are some things that you'll miss if you get your political news from TV alone, like the size of a crowd at a political rally.

And that's the magic that VR will bring to the US Democratic Presidential debate on October 13. CNN will allow you to strap on a Samsung Gear VR and dictate your gaze to read body language as you please, and observe the off camera reactions of Hillary Clinton, Bernie Sanders and co. 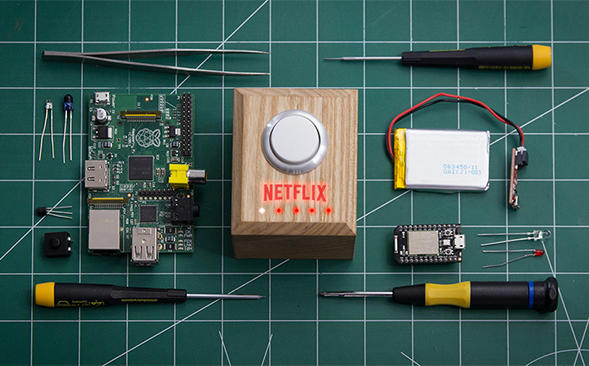 Netflix have started a new project called 'Make It', where it aims to bring its viewers dreams to life. The first of these is The Switch, a big Netflix button where one press dims the lights, silences incoming calls, orders takeout, and turns on Netflix. They've published a step-by-step guide on how to make your own Switch, and how you can customise it to do carry out other commands too. Unfortunately it won't fetch the ice-cream from the freezer, #effort