May the fourth be with you!!

This week Google introduced their first ever VR doodle which is a charming tribute to illusionist and film director Georges Méliès.

The Irish Independence Film Collection, tells the story of Ireland during one of its most turbulent and revolutionary periods, from 1914 to 1930. During this period WW1, the Easter Rising, the War of Independence, and the Irish Civil War all took place. The Irish Film Institute (IFI) has now made some of these moments, as captured on cinema newsreels from the time, available to the public.

To aid content exploration, on the IFI Player apps, Axonista developed a unique feature - a discovery timeline, which allows users to browse through the years, and associated newsreels. The collection also features curated playlists, with historical experts. At Rerun we think this interactive discovery helps tell the story of Ireland, whilst give historic context and relevance to the user.

The collection is available now on mobile platforms of the IFI Player.

Are recommendation engines getting it wrong? — The Fourth Wall

This week on our new design blog, The Fourth Wall, we dig into the flawed world of recommendation engines. Why we need them and problems they still have to address. If you've ever been perplexed by what Netflix is recommending you to watch - you should read this article. 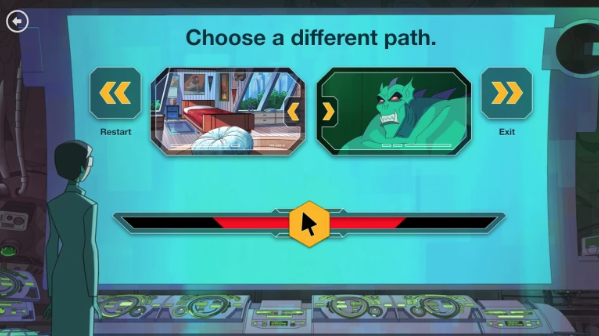 The future of Netflix might be interactive TV, and it’s already here

It seems Netflix is branching out its interactive storytelling experiments to more shows. Previously, Netflix added interactive storylines to 'Buddy Thunderstruck' and 'Puss in Boots'. Now they have experimented with an episode for 'Stretch Armstrong and the Flex Fighters', 'The Breakout'. The special episode features a two-branching narrative with different storylines and endings that a viewer can't branch back to.

At Rerun we find it very exciting that we could be seeing more use of interactivity from Netflix. The show-runners of 'Sketch' acknowledge that Netflix's interactive technology could be applied to more show's under the Netflix umbrella.

Evan Spiegel made many grandiose statements about the Snapchat redesign late last year, specifically around separating your friends from publishers & brands. Now, he's doing a reversal, because advertisers hated it and Snapchat's userbase actually shrank in March.

Our take: Facebook is revamping its Messenger to remove all the annoying clutter (ads, games, etc), WhatsApp Stories has quietly amassed 450 million daily active users, and Instagram is going from strength to strength. Meanwhile, Snap has recently IPO'd, is non-profitable, hasn't won the trust of advertisers, and is losing users. To say Snap is in for an uphill struggle is putting it very mildly.

Hoping to get nothing but net, Under Armour have launched their first interactive quiz app, Steph IQ. The basketball-themed quiz app will give basketball fans an opportunity to win store credit, shoes, Steph's own sneakers and even some NBA playoff tickets!

During each of the Golden State Warriors playoff games, Steph IQ will go live when Steph Curry scores his first three-pointer. Then fans will have to answer 8 questions, starting from easy to hard.

We just hope for the fans' sake they make it to the finals.

Stories are about to surpass feed sharing. Now what?

Usage of Stories is up 842% over the past two years, has almost 1 billion users, and Facebook predicts that they'll take over the news feed sometime next year. So what does this mean for the future of social media, advertising, and digital communication?

"If Stories are our new favorite tool, we must learn to wield them judiciously. Sometimes a memory is worth more than an audience. [...] There’s no richer way to share, so they’re going to be around for a while. We better learn to gracefully coexist." — Josh Constine, Editor-at-large @ Techcrunch

Sidenote: Along with this comes the very real prospect of vertical video becoming the #1 video format on social media, especially for advertisers. Chew on that!

A history of audio storytelling: 10 seminal moments and timeless formats

In March of this year, Apple Podcasts reported 50 bn all-time episode downloads and streams, up from 7 bn in 2014. So you'd be forgiven for thinking audio storytelling is a recent phenomenon.

This post by Damian Radcliffe compiles notable moments in audio storytelling. From Orson Welles' 1938 War of the Worlds drama, to radio talk shows and breaking news stories. A delight for the ears.

Video and interactive media arts dominate this years' Turner Prize nominations. Of the four nominees, three are solo artists working with video whilst the final nominee is Forensic Architecture - a research agency based at Goldsmiths, University of London.

The winner will be announced in December and all four nominees will be exhibiting at Tate Britain from September.

Yesterday Oculus launched a new budget friendly VR headset, Oculus Go. It's a standalone, no-wires and no-phone-required, headset that's sure to offer an attractive gateway for many into the world of virtual reality.

Meanwhile. Oculus also demonstrated some exciting new lenses that sport a wider FOV and automatically move. The new prototype headset showcases a feature that, according to Ars Technica's Sam Machkovech:

[...] has never been demonstrated in a commercial headset before: a mechanical assembly that quickly moves lenses closer to and farther from a user's face while they're using a VR app.

Disney made a VR jacket that can simulate hugs, and snakes crawling on your back

Disney wants to give you a bear hug. Or—as they cryptically call it—an "adult enclosure".

But their new Force Jacket is a step toward make the experience of virtual reality a bit more real. We've talked about gloves that simulate the feeling of holding an object in VR. Well, this jacket can make you feel all kinds of new sensations: Snakes on your back, rain drops, a punch in the gut, or a bear hug. Think of the possibilities!

That is all from the Rerun team at Axonista. Go fourth, have a fantastic week and we look forward to sharing more news on the future of TV and interactive video next week.