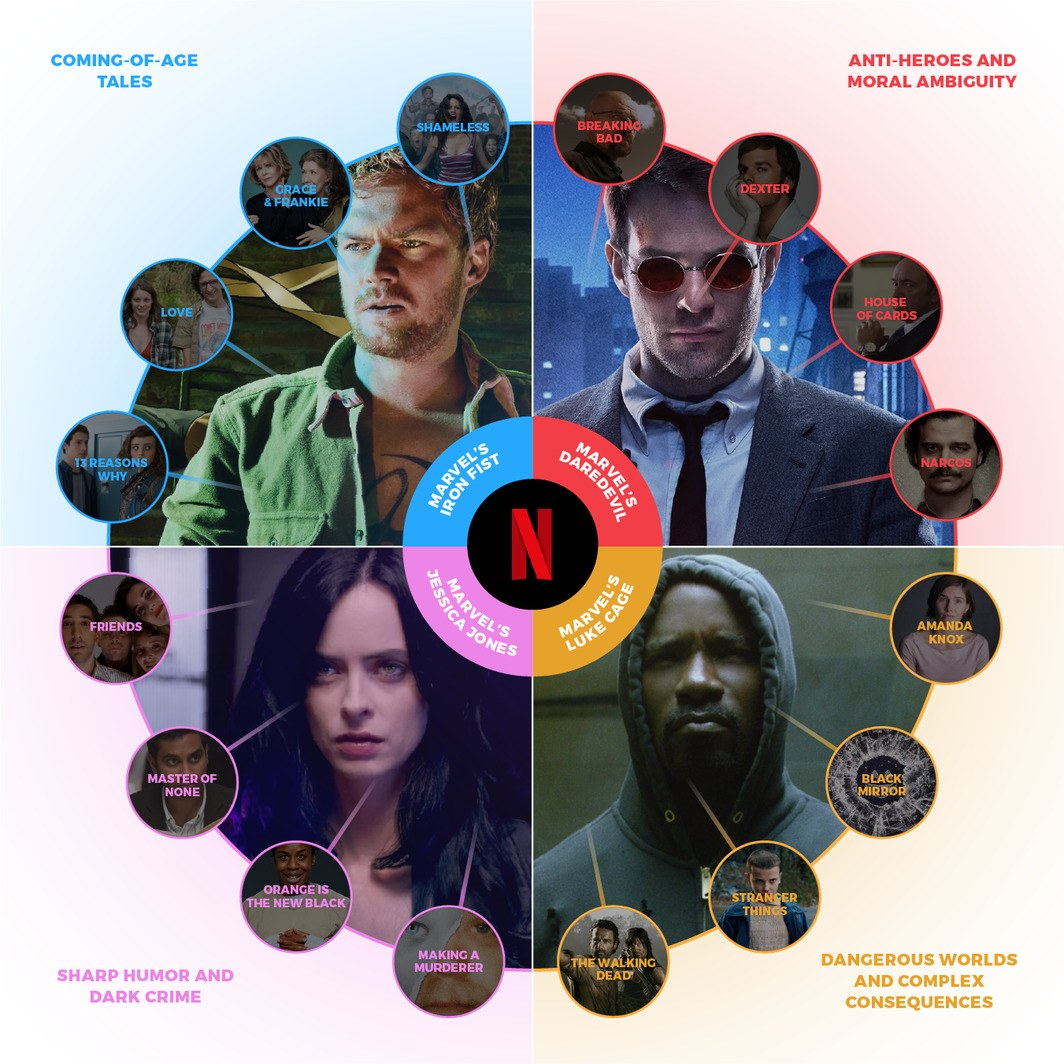 Netflix is using The Defenders to understand its audience

Netflix's data scientists and machine learning engineers are keeping an eye on what you're watching. All to understand your viewing tastes and recommend you programs that you might like.

They already know that Narcos fans enjoy Luke Cage. If you like Friends you'll enjoy both Jessica Jones and Daredevil. So who watches when four Marvel superheroes join forces to create one mini-series? That's what Netflix are hoping to understand better with the release of The Defenders. It's success will decide if other mash-ups are worth investing in.

“Even if you look at historical things like the Avengers series in movies that Marvel does—there you can do big surveys, but you never know exact behaviour. But we will. What we’re going to be learning as a company from both the algorithm side and the content side is what happens when you pair up shows that aren’t exactly the same thing.”

Walmart and Google are teaming up to fight Amazon’s Echo

Walmart and Google have joined forces to fight Amazon's dominance of online shopping with voice-controlled devices. From late September, users will be able to purchase Walmart products through Google’s voice assistant. Through this collaboration, Walmart hopes to challenge Amazon’s current dominance of the market for retail with voice-controlled devices.

At Rerun, we think the fact Amazon have released Alexa to third party developers could make the challenge even greater for Walmart and Google, particularly if Alexa becomes popular on third party devices. And if that isn't challenge enough, Amazon have announced their Whole Foods take over will close on Monday, and they intend to reduce the cost of Whole Foods organic and healthy products. 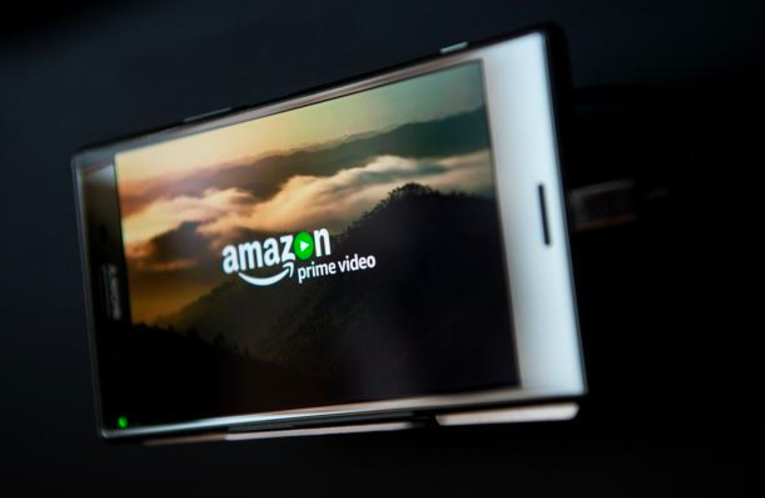 Amazon Prime Video is eyeing reality shows to drive online viewership in India. This follows the success of its original series Inside Edge based on the game of cricket this summer.

It's interesting that this announcement comes after Netflix commissioned two more original series for India: Selection Day, a story of cricket and corruption, and Again, a female-led detective series. Amazon Prime have also responded to Netflix's wildly popular Black Mirror with their own take on the genre. A series based on Philip K. Dick's Electric Dreams will soon be available on the service.

Better together: Is Sinclair-led sports venture greater than sum of its parts?

Live sports is a key reason for TV viewers to subscribe to expensive cable packages. Rights deals are lucrative for sports bodies and advertisers alike. With new market entrants like Amazon, Facebook and Twitter getting involved in the bidding process, this is likely to be a hot area for some time to come.

Fresh from its (not yet complete) merger with Tribune Media, Sinclair Broadcast Group is increasing its reach by launching Stadium, a sports channel with an initial focus on live college events.

Using its 70 sports desks across the U.S., Sinclair will have a national sports network that’s also context rich at local level. In our view, this currently sets it apart from competing social networks.

The channel will be available to sports fans for free on TV in 59 markets via digital subchannels (a number that could increase dramatically if Sinclair’s merger with Tribune goes through) online via Twitter, Pluto TV and a standalone website; and through apps on virtually every device imaginable.

Discovery US boss: we’re in ‘hand to hand combat’ with Netflix

Interviewed at the Guardian Edinburgh International TV Festival, Discovery Channel president Rick Ross believes Discovery is in 'hand to hand combat' with Netflix. Ross has strong views on Netflix, and the binge watching trend it has fostered among its user base.

In his view, releasing entire seasons at once means many viewers are starting to run out of the content they value most highly. From a financial standpoint he argues that there are large risks in making huge investments in shows only to have them 'binged away'. While the ability to 'binge' view content appeals to some viewers, Ross argues not all viewers want to watch content like this.

With that in mind Discovery are thinking of new ways to engage viewers outside 'binge' viewing by branching out into non traditional TV models. Discovery will air Racing Extinction, a film that draws attention to mankind’s role in the potential loss of at least half the world’s species, in 220 countries and territories around the world in prime time in one day. This means Discovery will break with convention and starting with New Zealand to follow the time zones in order.

Marketers have their eyes on virtual reality as the new medium to tell their brand story. Or, as this article points out, VR brings us from story telling to story living. The idea behind it being that consumers are able to experience a brand on their own terms through VR. This is an opportunity that marketers are embracing and exploring.

Zoo, a creative think tank at Google, is exploring this through an anthropological research study on 180 and 360 degree video. Check out the podcast with Abigail Posner, head of strategic planning at Zoo, to hear about this research and to learn what excites them most about VR.

Learning to be an astronaut has never been so easy. NASA is using virtual reality to train space-goers on use of their tools and staying safe up there. One day they may practice driving the rover through Mars' rocky terrain. Another they'd have to get back to the station after being knocked off by debris. Spinning through space is a lot different in VR than on a TV screen. And here we thought Gravity was tough to watch!

VR technology brings a new type of immersion to these potentially fatal accidents. NASA's lab is bringing a new level of security to one of the worlds most dangerous jobs. We're excited to watch NASA's VR lab, and see what it may mean for making these tools accessible to the public. In other words, when can we start prepping for civilian space vacations?

Liberty Global's acquisition of F1, and its mission to bring more audience engagement to the sport has been visible both on and off the track. This is evident by bringing the drivers closer to fans during the live event, and its plans to launch a new digital offering.

This week, they take these plans one step further and have announced the launch of an F1 esports tournament. This is a fantastic way to both promote their new F1 video game for PS4, Xbox One, and attract younger viewers to the main event.

In true F1 glam style, the eSports finals will take place at the F1 season finale in Abu Dhabi in November, with plenty of fireworks!

Gamers Outreach Foundation is a nonprofit that helps entertain children stuck in hospital. They provide access to gaming consoles and the volunteers needed to help set them up.

Research has shown the benefit of gaming on the minds of adolescents. Helping with cognition, emotions, motivation and social skills. Each year 100,000 children enjoy the program. Creating a welcome distraction from their illnesses.