This week, we continue our Cannes Lions video interview series bringing you exclusive interviews with Rahul Chopra, CEO of Storyful and News Corp's Global Head of Video, and Jon Skogmo, CEO and founder of Jukin Media.

In the age of streaming TV, who needs title sequences?

If that question annoys you because you're a big fan of title sequences, then this article by The Verge is a must-read. It makes a strong case for why title sequences are actually more important than ever, with input from Patrick Clair. Who is he? Only the visionary behind some of the most iconic title sequences of late like 'Westworld', 'The Crown', and 'American Gods', all of which he received 2017 Emmy nominations for.

Essentially, a strong title sequence is like a book cover. It can entice an audience to watch a show, and this is exactly what American Gods did when they released the opening sequence well in advance of the show's release. It also acts as a mood setter, allowing the viewer to detach from reality and settle into the atmosphere of a show.

“The internet has made us all super visual. There is now a premium on rendering human experience in visual forms: video, photographs, emoji, GIFs. Visual culture 'is not just a part of your everyday life,' the theorist Nicholas Mirzoeff once wrote, 'it is your everyday life.'" - Patrick Clair 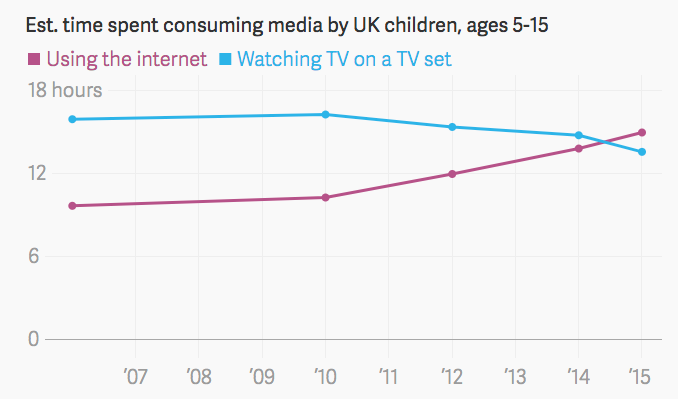 The real fight in the TV streaming wars is not over you. It’s over your kids.

There is a progressive shift occurring in children's television. The new generation of young viewers from the age of 5 to 15 now spend more time on the internet than they do watching TV on a regular TV set, according to a recent report by Ofcom. This means that young viewers are more likely to watch TV shows and movies on a tablet or smartphone, than on aTV.

For the likes of Netflix, Amazon Prime, HBO and the BBC capturing this audience will be essential to guarantee the future and prominence of their platforms. As a result each platform is now providing additional funds for kids programming and content. At Rerun, we think kids TV is a key battle ground for content makers and platforms; shows that capture young audiences can help guarantee future nostalgia viewership as audiences age. 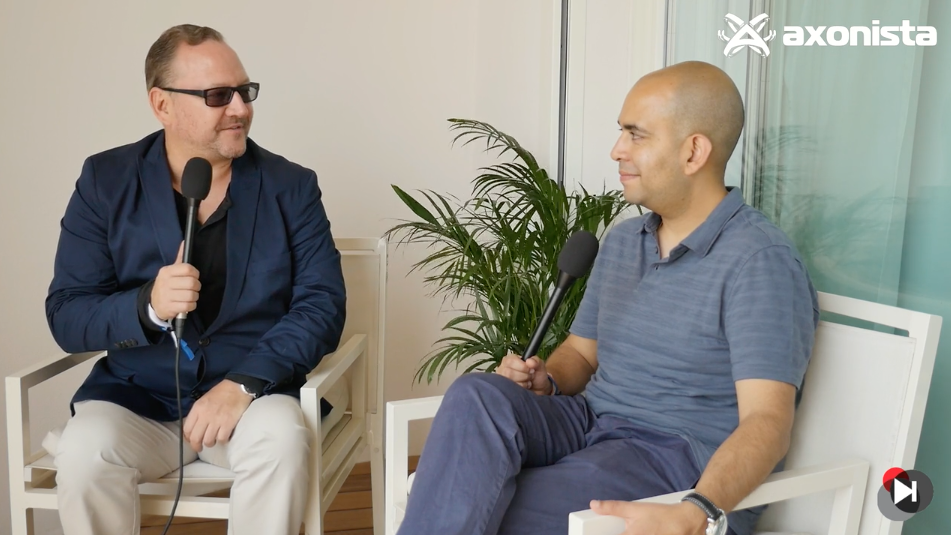 Our Dermot McCormack sat down with Storyful CEO and News Corp's Global Head of Video Rahul Chopra to discuss the future of the video industry, the importance of data in storytelling and of course, how amazing and innovative the startup scene is in Dublin - Woo hoo! 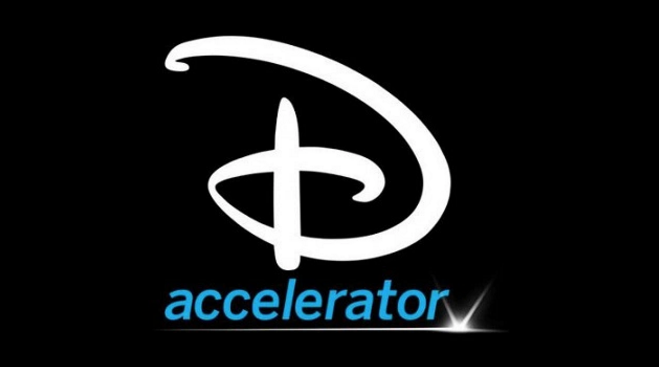 In its 4th annual incubator program, Disney has announced investment and support for 11 technology and media companies. Disney will invest in a diverse range of companies that are shaping not just future of content , gaming and VR, but companies shaping the wider digital future.

Some of The Disney Accelerator 2017 companies are:

‘Views can happen by accident’: Publishers are thinking more about watch time — and YouTube

Publishers on social platforms are finally realising that video views are not the most important metric (especially when a 'view' is 3 seconds of an auto-playing silent thumbnail). What's really important is watch time, as that signifies content that actually resonated with its audience.

“Views can happen by accident,” said Uyen Tieu, gm of CNN’s Great Big Story, which is averaging seven minutes per session on its mobile app and 35 minutes per session on Apple TV. Similarly, completion rates for Great Big Story on YouTube are between 70 and 80 percent, Tieu said. “That does not come by accident; that’s content that is actually connecting with an audience.”

This is good news for YouTube, as the most popular social platform where users go to engage with video for long amounts of time. Youtube’s algorithm already uses these stats to promote video that will create a ‘satisfying experience’ for the user. As watch time is becoming increasingly more important this will mean a rise in investment for premium, longer form content on social networks that care about engagement. 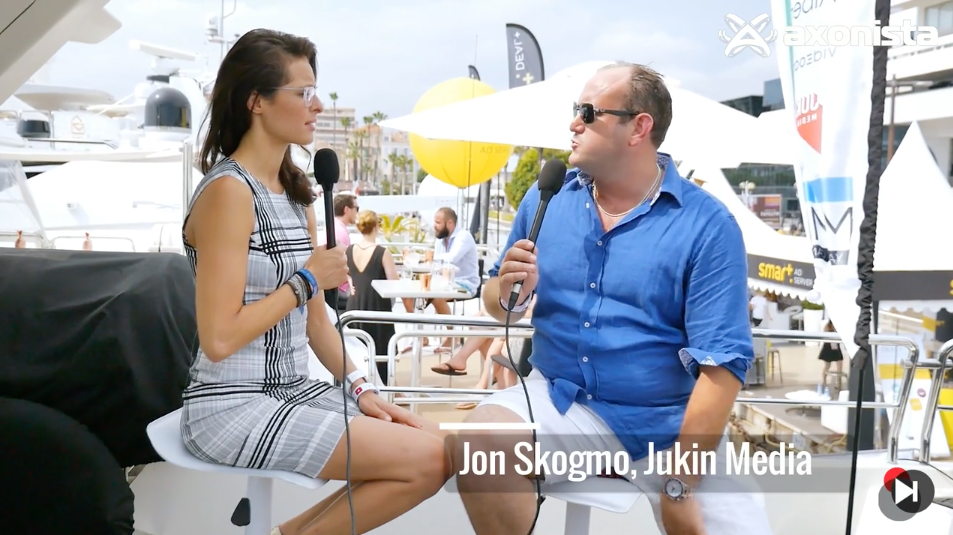 Our friend Jocelyn from VideoInk found a lovely yacht in Cannes to chat with Jukin Media Founder and CEO Jon Skogmo to talk about the value of user generated content for brands and Jukin's plans for scaling globally.

This article by Digiday citing "sources with knowledge of the matter" states that Premier League bosses are weighing up the pros and cons of live streaming directly to customers.

While the move would certainly be welcomed by fans, the end of the ballooning TV broadcast fees could drastically affect the league itself, especially now that clubs have become accustomed to the revenue. This summer so far sees Premier League clubs paying a £10m-£20m premium on players, as foreign clubs know that the money is there. Of course, it's equally possible that a smart streaming model could see the reverse happen, with the league's revenue increasing further. No doubt that's the only scenario which would see the Premier League pursue live streaming anyway.

In any case, most of the current set of major broadcast deals are set to expire in 2020, so we don't expect anything more than rumours like this for the near future.

Google Blocks, the company's newest VR play, is all about stuff, man

The VR industry has been desperately needing an entry-level app for creating 3D objects and scenes. Oculus' sculpting app 'Medium' comes close, but still requires actual knowledge of sculpting in order to make anything useful. Enter 'Blocks', a free app by Google that aims to be the VR equivalent of Lego. It leverages the popular 'low poly' art style to great effect, allowing people to quickly create 3D objects using simple blocks. Unlike Lego, these blocks can be squished, stretched, and coloured, and the results are just delightful.

More impressive is the fact that these simple objects can be exported to any other 3D software, meaning you can actually start using them immediately to create VR games and experiences, or even in 3D printing.

This is pretty freaky!

Researchers, from the University of Washington have developed a method of taking audio from a person speaking and generating a realistic lip-synced video to match. Currently the software only works well with audio and video of a single person, and the system needs several hours of source material to learn speech and facial movement patterns. But this new system could be useful in developing cutscenes for games or making it easier to animate 3D characters in films and shows.