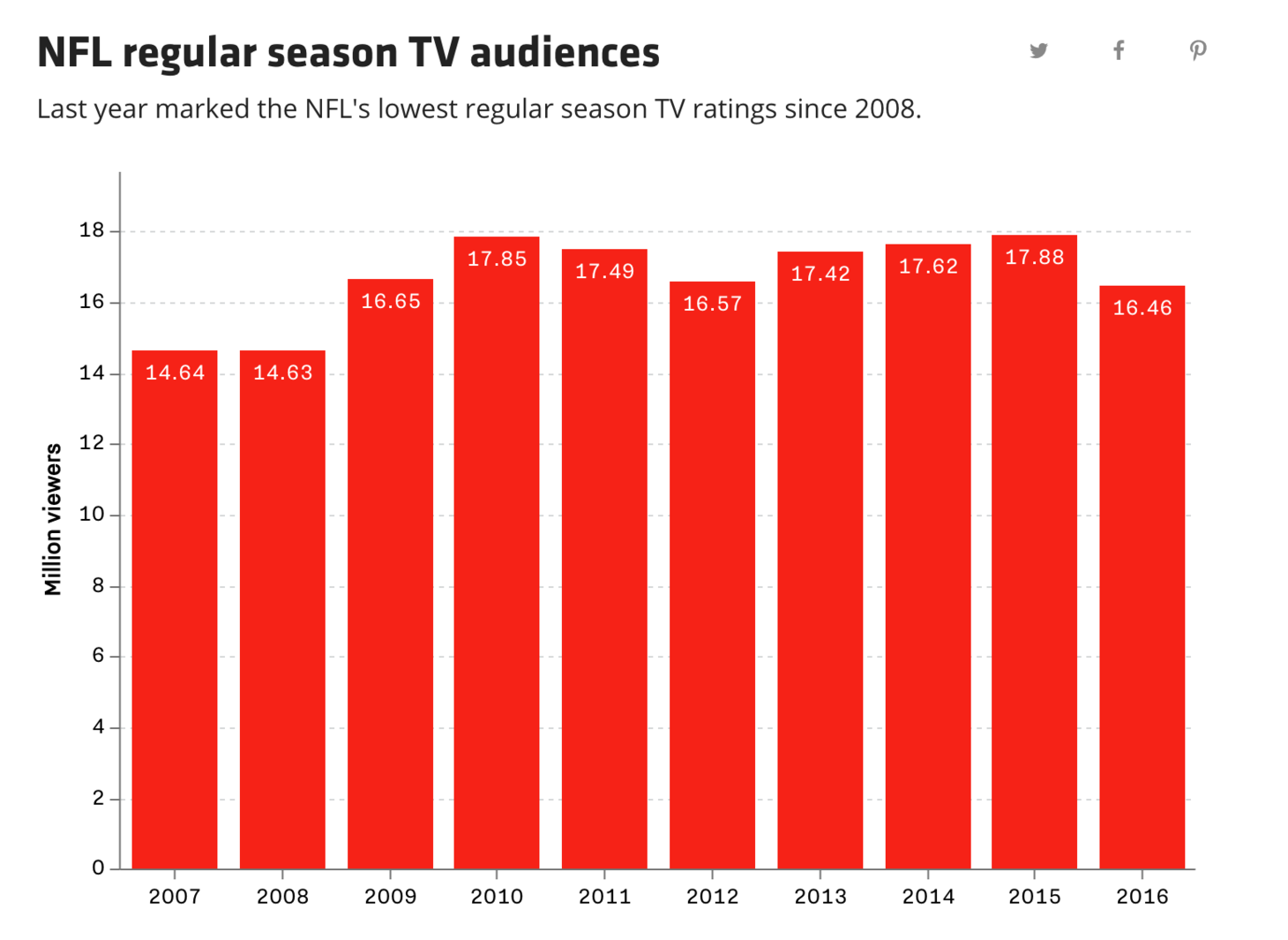 How the NFL juggles the future of streaming, the decline of TV, and billions of dollars

Recently there's been lots of talk about what Amazon Prime or the likes of NBC and CBS intend to do with their NFL broadcast rights. In the following piece form Kurt Wagner at Recode he flips the deck, and looks at what the NFL, from its perspective, intend to do.

The NFL currently has a large window of opportunity to experiment with its digital offering before its TV contracts run out in 2022. At Rerun, we think the NFL have an interesting dilemma. Should they experiment too much with digital alternatives they could run the risk of confusing their viewers. NFL fans might not be able to easily find or afford the content they want. The NFL will need to strike a balance of innovation in digital viewing experiences, without disrupting its viewers.

One thing Amazon and Twitter will need to learn from traditional broadcasters, is TV's ability to weave a sporting narrative that's worth following throughout a season. At Rerun, we believe it's a mistake to think that audiences will just turn up to watch the game. Such an error could cause both the loss of audiences and revenue.

In a bold Newfronts announcement (nicely summarised here by Recode), the much beleaguered Twitter has repositioned itself as going all-in for live video in a bid to carve out a successful future for the company.

It's smartly partnering with Bloomberg to create a live 24x7 news channel, and with several college and niche sports leagues to create a 24x7 sports offering entitled 'STADIUM'.

At Rerun, we think Twitter can learn a lot from TV's ability to craft a story around sports and news that guides an audience and keeps them watching. If they can marry these editorial values with the real-time connection and conversation that Twitter enables, this could be a very compelling offering.

Orange is the New Black was recently stolen from post-production company Larson Studios. When the thief, 'The Dark Overload' held the show ransom and threatened to release it, Netflix declined to pay. And so it appeared on The Pirate Bay. After ransom was refused for Orange Is the New Black, its release elsewhere was inevitable. But at Rerun, we think Netflix made the right call.

For the everyday, run of the mill streamer, torrenting is awkward. The process of downloading a torrenting client, finding a legit file etc. is time consuming and not really worth it when compared to the ease of Netflix. Netflix is now in over 200 countries, available across a huge range of devices, and gives a wealth of content for less than the cost of lunch. We reckon the general viewer is more than happy to wait for the official release of Orange is the New Black later this year.

We think there's a valuable lesson to be learnt for content providers. If, on the other hand Game of Thrones was stolen, it would be a huge blow for HBO. The reason being that Game of Thrones, in the first place, is hard to legitimately access worldwide. It was one of the most pirated shows last year. We think it's important that once a show becomes popular, it becomes easily available as soon as possible, to reduce worldwide piracy, and the impact of thieves like 'The Dark Overload'.

In a recent edition of Rerun, we wrote about the impact of live video, and the ethical challenges it raises for live video streaming platforms like Facebook.

At Rerun, we find it encouraging that Facebook has announced it's hiring an extra 3,000 people to help monitor violent videos and other objectionable material on its live video platform. This is in addition to its current team of 4,500. Facebook has also pledged to simplify its current reporting features and make it easier to contact the police if someone needs help.

This is a positive step in the right direction, and shows Facebook's will to address its ethical responsibility. It will be interesting to see how these improvements will take affect, and if they will actually work.

VR experiences have become features in programmes for film festivals, such as Sundance and Tribeca. When it comes to music festivals, however, it's Coachella that has been leading the charge for the platform.

Ned Atkins of UploadVR writes about how Coachella first started working with VR in 2012 with its live hologram of Tupac during a performance. Since then, Goldenvoice, the company behind Coachella, has dedicated resources to improving the immersive tech element of the festival. Partnering with YouTube and vantage.tv, the Coachella went live with the festival's 360 live streams, bringing in a whole new global audience.

360 video differs from VR in some fundamental aspects. Interactivity aside, it lacks the movement, head-tracking and natural parallax that actually creates the sense of immersion in VR. As a result of this though it's much cheaper and easier to produce than a full VR experience. One company looking to change that is Lytro. Their state of the art camera records real 3D footage, allowing the viewer to actually move freely around within the video.

The result of this technology breakthrough can be seen in 'Hallelujah', a VR reimagining of Leonard Cohen's prolific song, created by Zach Richter, Bobby Halvorson, and Eames Kolar in partnership with VR platform Within.