This week the BBC Earth team published a video showing members of a tribe from the remote island of Owarigi trying virtual reality for the first time!

Experiencing VR for the first time appears to be consistent experience no matter where you're from :)

Live internet TV: many have tried.

Products like Dish's Sling TV and Sony's PlayStation Vue haven't made the impact and taken ownership of the market in quite the way that Netflix has with streaming and video-on-demand. With the roll-out, this week, of Google's YouTube TV in select major US cities, Davey Alba of Wired believes that it's not just current live internet TV services that should be shaking; it's cable providers.

The instantly recognisable brand of YouTube makes YouTube TV a good bet to satisfy the market in a way that Dish and Sony have struggled to do so. What's more, with a price of just $35 dollars a month, this might be the biggest challenge the set-top box has seen yet.

Verizon insiders describe the fight to save go90

Business Insider have published an interesting look into the history of go90, Verizon's attempt to make its own Netflix competitor. Initially it stumbled out of the gates with both internal difficulties and overspend on content that didn't interest viewers.

But after a lot of shakeup, new executive hires and the acquisition of Vessel, the newly released iteration of go90 is much a leaner, more focused offering. It's clear they've been learning from their audience, now targeting areas like live sports, original sports shows, gaming, sci-fi, music and teen girl dramas.

Go90 had over 2.1 million monthly active users in the US, on iPhone and Android, in February, and it increased in size by a factor of 2.2 year-over-year, according to the app-analytics firm App Annie. (Verizon does not disclose user numbers.) But it will have to get a lot more than that to be considered a success.

A look at the internal memos of Twitch and Periscope

Ethan Kurzweil (@ethankurz) shares some of the internal memos he wrote recommending investment in Twitch and Periscope, in the hope that it will help give other teams some sense of how his company assesses the potential of a team and product. It's fascinating to look back on these early evaluations of Twitch and Periscope, knowing how both platforms have flourished since.

Both teams thought about the appeal and incentives for all of the various constituents — broadcasters, viewers and game developers/publishers in the case of Twitch, and broadcasters and viewers in Periscope. They thought up front about incentives and rewards (social, financial and otherwise) for being on the platform and how those mechanics differed as the products grew up and the online behavior became more mainstream.

Google's Chief Business Officer, Philipp Schindler, sat down with Recode this week to discuss YouTube's ad problem. Schindler gave off the impression that Google realize they have a problem they need to fix, but that reports of it have been greatly overblown.

"It has always been a small problem ... very, very, very small numbers ... And over the last few weeks, someone has decided to put a bit more of a spotlight on the problem."

Despite this, Google have already taken action to increase their detection by 5x. In addition, they've improved their responsiveness when someone reports a video. They've also introduced a change that will require creators to have at least 10,000 lifetime views in order to apply to monetise their videos.

“This new threshold gives us enough information to determine the validity of a channel. It also allows us to confirm if a channel is following our community guidelines and advertiser policies.” - Arial Bardin, YouTube VP of Product Management

The difference in content creation between Amazon and Netflix

Roy Price, the Head of Global Content at Amazon Prime, believes that for content makers there are no global customers and that a ‘multi-local strategy' must be employed in content creation. The success of Amazon Prime's 'We are Wanted', a German original, in Germany is perhaps evidence that this approach pays off. While key shows such as 'The Grand Tour' and 'The Man in the High Castle' help drive global subscriptions, local originals help to regionally complement the service.

Netflix, of course are making international originals with the likes of 'Narcos' and 'Ingobernable'. However unlike Amazon, Netflix do not approach content creation and licensing based on the region their users are in. They discovered their users, no manner where they are, have a global taste in content.

Amazon and Netflix also take very different approaches in movie releases. For Amazon a film is only digitally released after a theatrical release, ie 'Manchester by the Sea'. Price believes this gives a film credibility. Netflix, however, coincide digital and cinematic release ie 'Beasts of No Nation'. The advantage for Amazon Prime is that giving films a cinematic window first means they can take advantage of award season buzz.

ESPN is thinking beyond TV with ‘special projects’

Although ESPN's bread and butter has undoubtedly been live sports coverage and highlights, they've also had success with original productions. Their ongoing collection of 30 for 30 episodes has always been highly-praised. Their documentary series, O.J. Simpson: Made In America won an Oscar this year. Now, ESPN are continuing their quest for more original content.

On April 11th they will debut their brand new TV series We The Fans, in which they follow the fandom of Chicago Bears season-ticket holders throughout the 2016-17 season. Given ESPN's record, there is little doubt this series will be great. But ESPN are taking this one step further, to social platforms.

For instance, on Instagram, where ESPN is already popular, the company will create Instagram Stories for each episode of the show in order to profile specific fans in the section. The company will also create short-form videos for ESPN’s sites, apps and social channels, which will often include footage that wasn’t used for the TV episodes.

ESPN are continuing to embrace being a multi-platform company for sports content. They've been successful with CollegeGameday content on Snapchat and other types of digital for shows like SportsCenter. It's likely that if ESPN stick to what they're good at, they can make ventures like this a success. 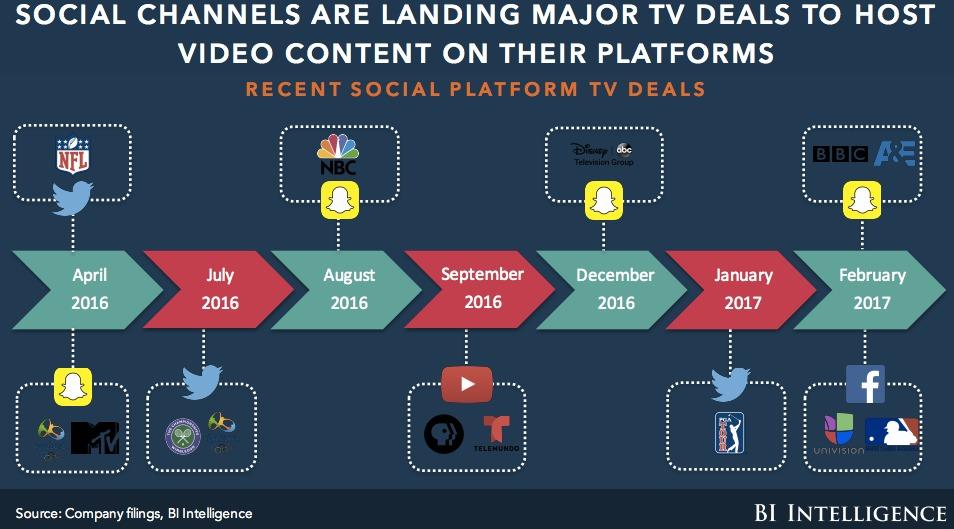 This deck from Business Insider charts the evolution of TV over the last 8 years. It's a great record of the power shift from cable to digital, and the rise of mobile video and social video platforms.

Lots of pitch deck worthy stats here including these 3 faves.

On the Vive’s first birthday, the VR conversation is getting calmer

Remarking on the one year anniversary of HTC's Vive, Adi Robertson from The Verge puts into perspective the milestones that have been in reached in the past year, such as other headsets that have been launched, as well as the volume of headsets produced for the market. Robertson argues that VR hasn't entered into mainstream culture just yet ("Virtual reality arcades are here, but they’re still in the novelty period."), but HTC's launch of its VR app subscription service at $7 per month might soon change that. However, mobile platforms that support virtual experiences still haven't reached critical mass, so VR's continuing challenges are very real, indeed. 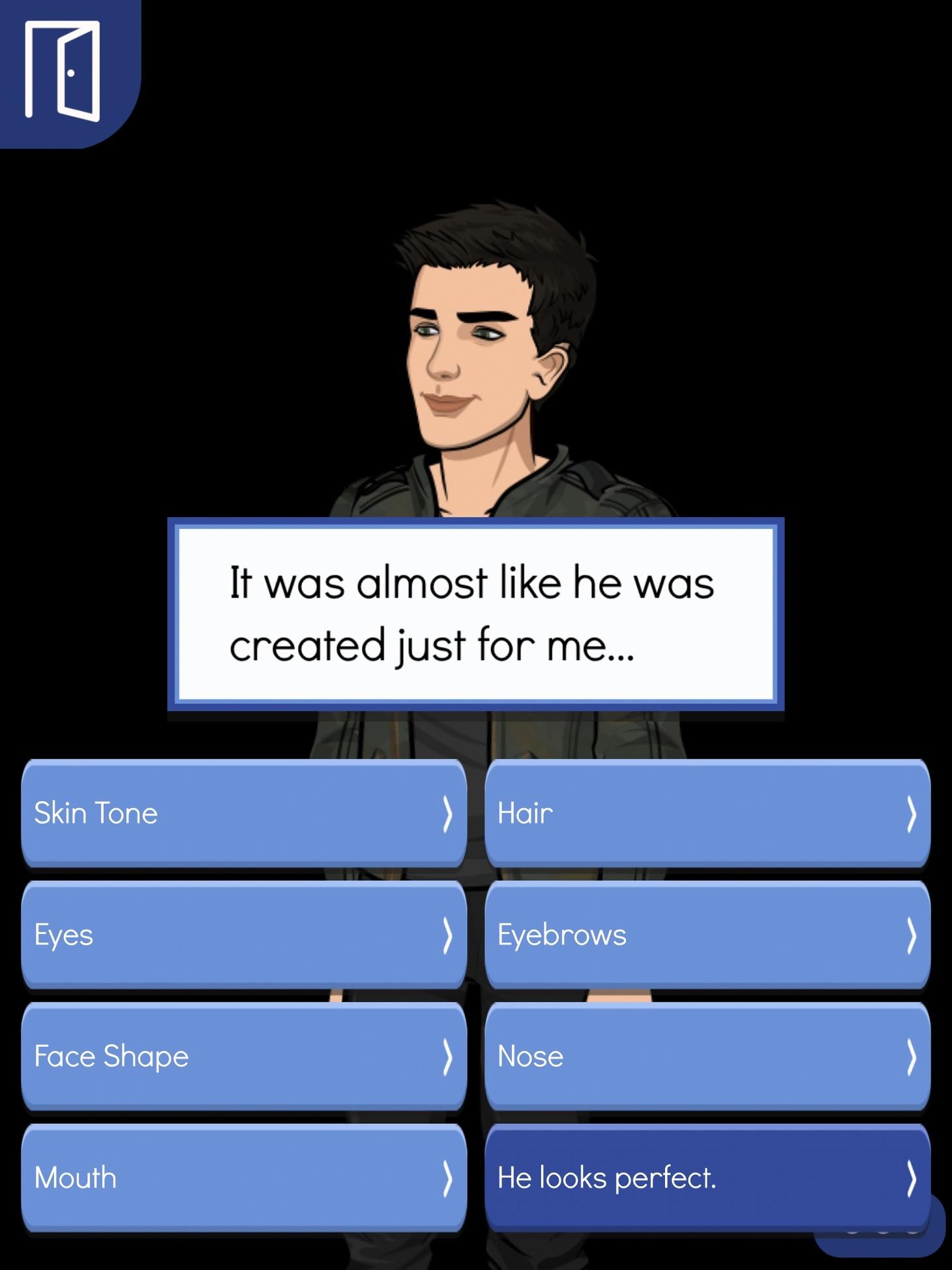 The concept of Episode is pretty neat. The Episode app is a mobile storytelling network and platform where for teenagers, where users can choose and create their own story paths and avatars. The app has partnered with Paramount and Warner Brothers Studios to create story experiences around major titles like 'Mean Girls', 'Pretty Little Liars' and 'Catfish'.

At Rerun, we had go of the app and discovered it has a strong competitive element where users can earn points and passes to unlock new narrative pathways. It's clever, as it keeps the user coming back for more.