Welcome to Rerun 91! Let's get straight to it!

Watching the NBA in VR is surprisingly good

The lack of compelling, original content in VR is no secret, which is, perhaps, a reason for its slow growth. However, the potential for the sports and entertainment industries to harness VR to deliver an experience every bit as vivid and interactive as the real thing is what might push the growth of VR content in the coming years. The first out of the traps? The NBA.

The NBA's showing of one VR game per week, in partnership with NextVR, a company that broadcasts live events in VR, marks the first time that an American, pro-sports league is broadcasting a regularly-scheduled series of live games in VR throughout a season. What's required? Consumers will need a Samsung VR headset ($99.99), a compatible Samsung phone, and NextVR's app. According to NextVR, their broadcasts will also soon be available on other VR platforms, such as Daydream and Playstation. Basketball fans must also subscribe to NBA League Pass ($199), which will allow users to watch almost every NBA game on television, computer or mobile devices.

You've likely noticed a purchasing trend among mobile network operators recently. At Rerun we certainly have. Companies such as Verizon and AT&T are buying up media companies like AOL, Yahoo, and Time Warner. What is the reason behind the purchasing trend? Well, a thing called zero-rating is an important factor.

'Zero-rating is a term used to describe the practice of mobile operators offering customers the chance to consume content from certain apps or services without that consumption counting against their data plans.'

Currently mobile operators find that zero-rating works in attracting new subscribers and reducing churn among current users. In the last six months, T-Mobile has gained nearly 2 million subscribers at AT&T’s and Verizon’s expense, and they attribute such subscriber success to zero-rated plans like Binge On.

The popularity and success of such plans for mobile operators, that own content producers, is likely to increase with the development of 5G networks. As 5G comes into being, the maximum upload and download speeds possible over wireless networks will increase 10 fold. In the future, this potentially means a user can download full-length HD movies and tv shows in under 10 seconds! However, the EU's Net Neutrality rules might cause issues for mobile operators expanding their zero rated plans in Europe.

Trying to extrapolate a coherent theme from these videos is challenging ... it seems like people will watch almost anything if someone else tells them to, or if they recognize where it’s coming from. Many of the top videos this year fall under well-known brands or entities like Spike TV’s Lip Sync Battle, vlogger Casey Neistat, and John Oliver’s Last Week Tonight.

Occupying the #1 spot is James Corden and his Carpool Karaoke series with a staggering 136,793,612 views. Corden has proven himself to be an incredibly media-savvy individual, breaking out of a traditional U.S. late-night slot and finding a massive audience online. We totally expect to see him on this list again next year. 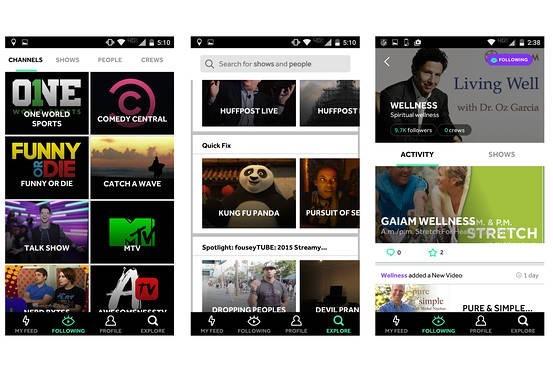 One Year later: Verizon’s plans for video on go90 and beyond in 2017

Jocelyn Johnson from VideoInk looks at the state of Verizon and go90, and what 2017 holds in store for the platform. 2016 was a year of learning for them in every aspect from demographics to content, and 2017 promises to be the year they drive full steam ahead.

“What you’ll start to see from go90 is a collection of targeted networks with a distinct brand voice programming against demo and interest areas. We will lean in to where we are strong with young females and sports fans. But we will also add in new networks..." - Ivana Kirkbride, Chief Content Officer at go90

Prolific video producer Felix Kjellberg, (aka PewDiePie), has suggested changes in YouTube's algorithms, around the 'suggested videos' feed have affected the discoverability of creators' content.

Mr Kjellberg said the feed usually accounted for more than 30% of his video traffic, but in recent weeks it had suddenly fallen to under 1%, signalling an undisclosed algorithm change.

YouTube have since denied making any algorithm changes. But PewDiePie feels so strongly on these issues, he has threatened to delete his YouTube account. Considering Forbes listed PewDiePie as the highest-paid YouTube star for the second year in a row, this is no idle threat.

In a video published on YouTube, PewDiePie, says he would delete his account once he reached 50 million subscribers. Thanks to popularity of his dramatic statement, he has now reached this target.

For PewDiePie, the end is nigh at noon (5PM GMT) today.

Facebook are introducing a video tab. The new feature, has been tested for the last year with a small group of users, and will be rolled out en masse. It's all part of Facebook's strategy to include more video it the user experience. For media analysts and media buyers, the dedicated video positions Facebook to take more advertising revenue from traditional TV.

“It’s been difficult to look at Facebook video as a premium offering, as it has so far been somewhat hidden in your feed and not had its own dedicated channel,” said Kirsten Atkinson, vp of media and branded integration at Walton Isaacson. “But them making making a concerted effort to program it and create a dedicated space for it will definitely attract more buys.”

What marketers can learn from Facebook Live's top brand videos

Live video: it's demanding and it requires meticulous preparation and an ability to adapt if things go wrong. Thanks to Facebook’s built-in feature to archive live videos, mistakes can be replayed again and again.

Since Facebook Live opened up to the platform’s 1.6 billion users in April, a deluge of U.K. brands have been experimenting with the feature and attempting to maximise the potential of Facebook Live for brand exposure.

Like any new social feature that has huge potential for marketers, it will, inevitably, be only by looking at the successful examples of other brands that, over time, a clear "how-to" for Facebook Live is generated.

By looking at 5 clips from 2016, Digiday argue that the key tips that marketers can learn using Facebook Live are adding drama and urgency to what could be a very simple social media giveaway; react quickly, be relevant and, most importantly, have a clear call to action that drives engagement; merge social content with activity in the real world.

'Tis the season to wander around New York department stores! Barney's, Bloomingdales and Saks Fifth Avenue, among 15 other stores, are in VR thanks to Google's Winter Wonderland app.

According to Google, the app stitches together hundreds of high-res photos into "rich, lifelike panoramas." Viewed on Google's Daydream View or other VR headsets, users can "even be surrounded by the sounds and sights of the city streets, taking in the storefront view alongside other onlookers".

Winter Wonderland being a Google app, it wouldn't be complete without quirky touches... When viewing Barney's features installations from South Park creators Matt Stone and Trey Parker, as well as an installation from visual artist Nick cave around race and gender in sculpture, both are in support of the #LovePeaceJoyProject charity campaign. Meanwhile, Bloomingdales' features glowing chandeliers and a slightly nightmarish Christmas candy-inspired couture theme from Saks Fifth Avenue.

All in all, a compelling VR idea that puts a twist on seasonal themes.

This new official app from The White House lets you transform a $1 bill into a miniature Minecraft-style version of the building. It even recreates some major events like state arrival ceremonies and the annual Easter Egg Roll.