Happy Friday! Welcome to Issue 70 of Rerun by Axonista!

It’s been a busy week for streaming and, in our Top Pick, we see Mr Robot’s season 2 premiere launched on Facebook. In further streaming news, Twitter struck a deal with Bloomberg Media and social media became the first to break lots of important news.

We also have some great insights into children’s TV on YouTube and an informative history of the TV show title sequence. In VR news, Paul McCartney teams with Jaunt VR to produce a fantastic VR documentary series on his music. And in AR news- aside from the mammoth success of Pokemon Go- some students have only gone and created some AR ad blocking glasses!

This week USA Network and the creators of Mr. Robot exhibited unmatched ingenuity in using today's most popular platforms, often situated on mobile devices, to market traditional television. During a pre-promoted Facebook Live interview with the show's stars, the stream was "hacked," and the viewers were informed that they were going to be given a "gift"—the Season 2 premiere a whole three days before it was set to air on linear television.

This post from Jesse Redniss at TV[R]EV describes the thrill of watching it all unfold live.

Watching by the light of my small iPhone screen at 7:25pm ET while putting my 16 month old to bed, I was engrossed in my FB stream, watching the full episode premier of one of my favorite shows, a full 3 days before it even hits the Live Linear waves of USA Network.

The premiere was also released on other video streaming services and social media sites: Snapchat, Twitter, Youtube, Amazon Video, and the USA Network site itself.

Overall, a very fitting and well co-ordinated marketing exercise, that both rewards existing fans and builds new ones. 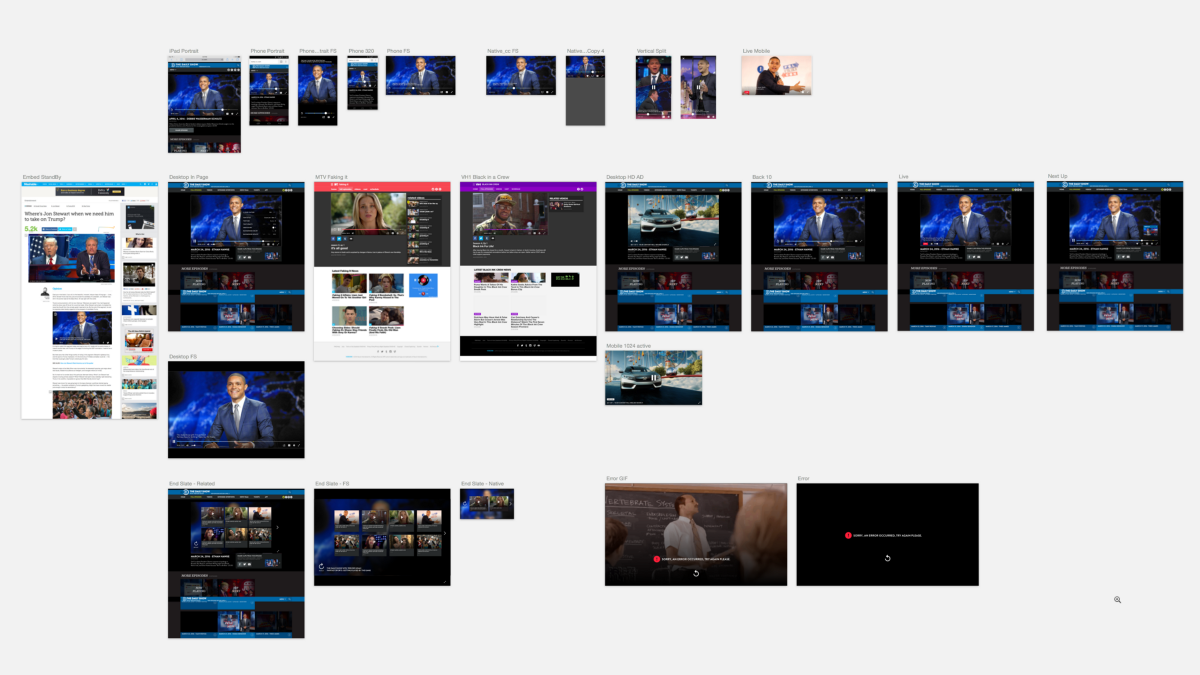 It's just a video player, right?

Videos today can appear on many platforms and apps and can be controlled by mouse, finger, remote or voice. They also need to symbiotically look at one with their environment and the content or brand within the video itself. They need to be fluid, fast and avoid that dreaded buffering spinner. A lot of design and engineering goes into that unassuming rectangle on your screen!

Viacom recently redesigned its player for use by all its brands across many platforms, and published a nice blog with some insights from the process. Worth a read.

YouTube's popularity with children is impossible for TV producers to ignore, but animation companies are struggling to keep up with the pace. Many of the most popular YouTube channels don't look like traditional children's TV, instead taking the form of toy-unboxing videos, video blogs or Minecraft gamers. It's content that's quick and cheap to produce, and suits YouTube's recommendation algorithm perfectly.

Many animators, however, struggle to hit these targets. Some are trying to work with the algorithm by posting vlogs and making-of videos, while others are sticking to their guns and hoping quality will find them an audience.

PewDiePie and other YouTubers took money from Warner Bros. for positive game reviews

Hardly on par with the Quiz Show scandals of the 1950s, but this week Warner Bros. has received a slap on the wrist from the FTC for paying YouTube influencers for positive reviews of its games.

PewDiePie is named as one paid reviewer, although he did disclose the sponsorship. Others made no reference to the sponsorship in the videos and this is the source of the problem.

Where such deals are strictly regulated and monitored in traditional television and advertising, there has been less emphasis on digital video, although the FTC ruling might change that.

Live streaming breaks through, and cable news has much to fear

Cable news has gained more viewership from ‘breaking news’ events like terrorist attacks, police shootings and elections. But in recent days we’ve seen these stories live streamed by citizen journalists who are at the centre of the action. Where some question if such live streams represent journalism or surveillance, it nonetheless follows that live streaming has transformed television’s relationship to emerging stories.

BuzzFeed expands on the dominance of such events on social platforms, suggesting that often-polarised Twitter and Facebook might be more inter-dependent, with Facebook used to share with friends and Twitter by those with shared interests and views. Broadcast news might form such a relationship with social media, focusing on contextualising and making sense of emerging news narratives. This is something quite difficult to achieve on social platforms which tends to be unfiltered and immediate.

NBC Universal patents a method for hunting piracy in real-time

File sharing is back in the news. NBC Universal have been granted a patent for identifying file sharing in real time. Elsewhere Kim Dotcom is rumoured to be relaunching Megaupload, the file sharing and hosting website that was shut down a few years back.

It seems the battle between rights holders and file sharers continues, although as more legal sources for content distribute are provided, this might reduce the incentive to illegally download.

Twitter signs another live-streaming deal, this time with Bloomberg

This week Twitter announced live streaming deals with Wimbledon, CBS Network's political coverage, and Bloomberg Media. Much of Bloomberg's day time audience are financial professionals at their desks, or on their devices, so serving up a combination of live coverage plus context-rich commentary makes complete sense.

The key to getting it right will lie in the implementation of the user experience.

It starts with the earliest days of television, describing the opening credits of that period as a platform for sponsors' product placement, and ends with a discussion of the "era of the elaborate opener," referencing the likes of Game of Thrones and Orange Is the New Black.

The article also discusses everything in between, and includes videos of the opening credit sequences of some of the most popular shows from each era, thus making it a fun—and nostalgic—read. 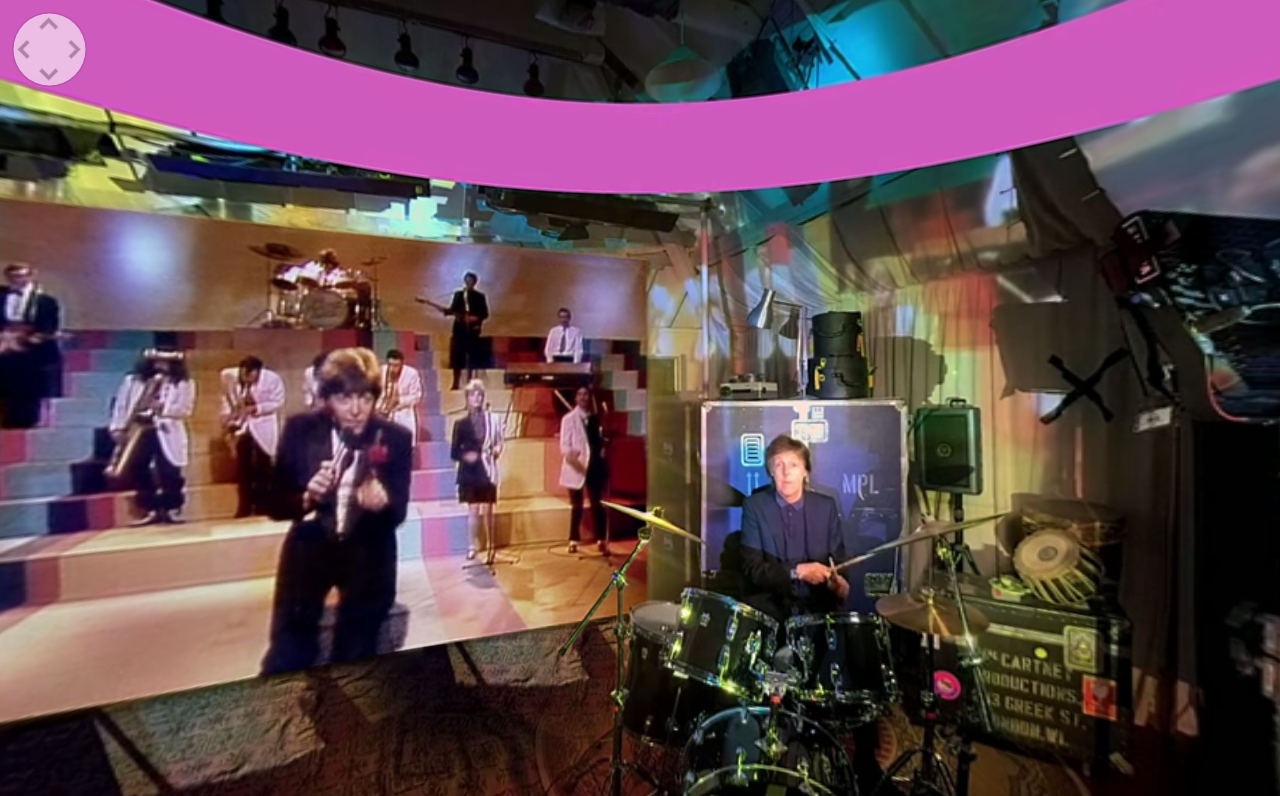 Bringing storytelling back to music with Paul McCartney and VR

Ask most any audiophile, and they’ll lament the loss of liner notes. What we gain in the proliferation of digital content comes at the cost of a great degree of intimacy; music instead gets packaged as a mere collection of sound files.

This collaboration between Jaunt VR and Paul McCartney revives the storytelling function of album sleeve notes by offering a fascinating insight into the production of McCartney's songs, videos and albums. The psychedelic form of the VR experience is as mesmerising and artful as the Beatles' album notes were. Take a look at a sequence from the episode 'Coming Up' to see for yourself.

Students in the US have created an ad blocker prototype for AR called Brand Killer, inspired by an episode of Charlie Brooker's dystopian future show Black Mirror.

We created a real-world AdBlock to blur real ads in the environment said Reed Rosenbluth, one of the students who developed Brand Killer. We used real-time detection to apply a blur to the object - hiding and effectively blocking the ad from the wearer's point of view.

We wonder if it can be used to filter out wild Pokemon :)

If VR doesn't accomplish anything else, it will be labeled a success for having produced this great video of a 71-year-old man staving off zombies in his grandson's VR game. Well... that may not be exactly true, but that doesn't make the video any less awesome. Give the full clip a view to start your weekend off on a high note.