This week we spotted the product that you never knew you needed. The DolphinView headset which lets you see like your favourite sea creature! 🐬

Animating the Future – How We Get To Next

Which 20th century pioneer can count Harry Truman, Wernher von Braun, Bugs Bunny and the Portland Cement Association as friends? Walt Disney as it turns out, that's who.

We know this thanks to the folks over at How we get to Next, where Darren Garrett has a superb and handsomely illustrated piece about Walt Disney's vision of a not-so distant future utopia.

Walt Disney was a pioneer throughout his career, looking to the future in both his medium and through the visions his artists created.

Although some of the ideas and imagery may evoke nostalgic whimsy, Disney's methods were througuhly modern and utterly familiar to us today:

As an expert visual storyteller, Disney was perfectly poised to use the medium to achieve maximum impact. He was moving towards his ultimate dream: to build the city of the future, [...] a utopian example of a better way to live for the rest of the world.

It's a fascinating long-read that builds out the historical context surrounding characters and cartoons we all know so well. 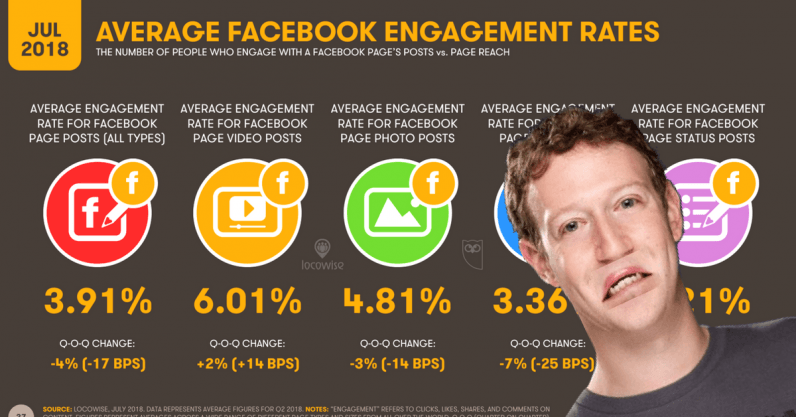 This week Facebook's stock took a huge 20% hit following Q2 earnings, which revealed its slowest ever rate of user growth, and a decline in user numbers in Europe.

In more not-awesome news for Facebook, Hootsuite's Q3 Global Digital Statshot report stated that the average Facebook user clicked on 20% less ads, than they did three months ago.

Internet adoption, however, is still on the rise, particularly in Africa and South Asia.

Roughly 300 million people came online in the twelve months to July 2018, equating to an average of almost 10 new users every second.

Perhaps a rumoured partnership between Facebook and Alibaba in China will help increase user growth in new markets?

Youtube highlights the improvements to their relationship with content creators while giving little attention to its increasingly important role as content moderator, its rules and how it intends to enforce them.

Content creators can look forward to increased communication and transparency about upcoming changes to the platform, with Creator Insider.

The sources of revenue for content creators will become more diversified with the expansion of merchandising tools like Teespring, and YouTube's own Famebit which can be used to connect creators and brands for paid content creation.

Enjoy a good deep dive on interactive storytelling, straight from the designer's brain? Check out this piece about Florence, a game created by former lead designer from Monument Valley.

And if you're into the topic, check out our post about Florence and other prime examples of storytelling and interactive video.

VR has reached a "tipping point".

This article by Futurism—who spoke to 'Defying Reality' author David Ewalt—makes the case that VR has reached a 'tipping point'.

We've been very bullish on the potential of VR on Rerun over the years, but still, it feels a little early to say we're at a 'tipping point'. The Oculus Go represents the best look at a wireless future, but there are still huge hurdles to solve with resolution, optics, interaction and technology. And that's not to mention tools for creators, standards, new paradigms, content distribution, affordability, comfort, safety...

If this sounds pessimistic, be assured it's not, it's realistic optimism!

Bleacher Report inches into commerce with a capsule collection

Bleacher Report, the Turner-owned sports publisher sold a collection of soccer jerseys the week before the World Cup began. The jerseys were created to the theme of Hip Hop meets World Cup. The featured rappers included 21 Savage, Vince Staples, Vic Mensa, Smokepurpp, and Black Thought from The Roots.

It was a 'worldie', with the publishers claiming to of sold “tens of thousands” of the jerseys which wildly exceeded its sales projections.

The commerce operation within Bleachers Report is new, with aims to expand the team throughout the year. The key to their success appears to be running short limited edition runs, and working with influencial people like rapper Smokepurpp who has over 2.8 million followers on Instagram allowing for their brand to meet new audiences.

This week's Rerun has a bitter sweet ending. We are saying goodbye to the creator of Rerun, our friend Ian, who is leaving Axonista today for pastures new.

Thank you for everything Ian, from all of us who are part of Team Rerun, and Axonista - we wish you all the very best in the future!