This week we get a little saucy with McDonalds's announcement to bring back the Szechuan sauce thanks to Rick and Morty fans! We take a look at how streaming is changing the sound of pop, oh and we look at the new AR game that allows you to chase after pigeons and lots more.

Game software developer, Unity, is becoming a force in the future of filmmaking and storytelling. Neill Blomkamp—director of District 9—is using Unity to make his next film, The Mirror. This is the sequel to their award winning short film, Adam.

In this piece Blomkamp speaks about its impact on his filmmaking process.

“It’s very different, but the principles are the same. From a directing perspective, it lets you focus only on the creative stuff that you’re making. You don’t have to worry about the logistics.”

Creative freedom is great, but there's more. Filmmakers can render films in VR, and Blomkamp feels that the cost of making these films will drop with tools like Unity. They even released the assets from Adam for free to creatives to make use of. Whatever the benefits and challenges, seeing these trailers and films alone is enough to tell this is going to be huge.

Uncovering how streaming is changing the sound of pop

Pop music has always reflected the times and distribution methods available. It's no surprise that music streaming sites like Spotify are influencing songwriting methods. This report by Pitchfork details how songs aim to capture listeners in the first 20 seconds. As video streaming becomes more popular on noisy sites like Facebook, content owners can learn a lot from this. 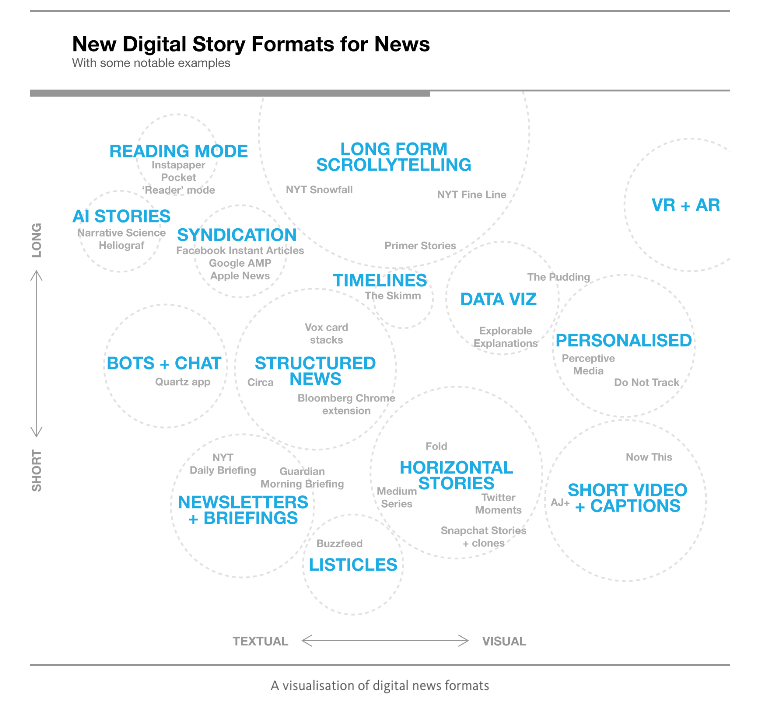 It has become something of a fact that news publishers have issues attracting and retaining audiences. With growing digital access and innovation by tech platforms there are real challenges in sustaining a viable business model. The BBC News Lab suggests that it may be time specific formats were designed for and by news publishers. They indicate that the news industry is guilty of taking formats developed elsewhere and repurposing them, or creating once off, expensive innovations that aren’t reused.

In the following piece The BBC News Lab breaks down the current news formats and the opportunities they provide. At Rerun, we believe innovation and iteration are essential for news organisations to win and grow audiences.

Only a week after an impressive IPO, shares at Roku have started to fall. An analyst from Moor Insights & Strategy attributes the fall to a “new lineup that doesn’t differentiate them too much from Apple, Amazon or Google”. Still, the shares are trading well above the $14-per-share IPO price.

Later in the week, Roku unveiled faster media players, universal remote and a new OS. The new offerings will impact both the low-to-middle tier devices, like Roku Express and Roku Streaming Stick, as well as Roku’s top-of-the-line player, Roku Ultra. The mid-tier Premiere and Premiere+ players are being discontinued, as customers either gravitate towards the affordable Express, portable Stick, or they splash out and choose Roku Ultra.

What makes multiplayer VR a success and a challenge?

In a medium as complex and nascent as VR, it almost seems too early to expect quality real-time multiplayer experiences. Nevertheless, titles like 'Echo Arena' and 'Star Trek: Bridge Crew' have shown that it can be done successfully. This article by VR Focus analyses 'Star Trek: Bridge Crew' to find out what makes it such a success, what learnings could be applied to future experiences, and what challenges still lie ahead.

We're starting to see a lot of great new apps making use of Apple’s ARKit on iOS 11. A few weeks ago it was Ikea allowing us to decorate our apartments in AR. Now, thanks to a London studio called Combo we can bait and chase virtual pigeons in a new app called Pigeon Panic.

The premise of Pigeon Panic is simple: you throw random bits of food like pizza, donuts, and other greasy bits of goodness indiscriminately at the screen to attract the virtual birds. Once they congregate like the filthy flying rats they are, you scare them off by running into them. The quicker you do so, and the more you attract and scare, the higher your score.

Despite its accidental leak earlier in the week, we think that Snapchat's new collaboration with artist Jeff Koons is pretty innovative and neat. Snapchat have created special lenses based on the artist's famous sculpture work.

The lenses are only available at certain locations around the world. Snapchat users can track the whereabouts of these lenses here. Once a user nears a location a filter will appear in the Snapchat camera. This filter will reveal the specially located Jeff Koons artwork. Snapchat is also asking artists to work with them on the website, hinting that future collaborations are in the works.