We're straight back into the mix this week with Amazon's first move into live sports broadcasting outside of the U.S., a post-cable network selling packages to local news stations, a report showing falling TV ownership in the U.S., VR baseball broadcasts and AR music videos.

At Rerun we think this could be a seminal moment for live sports broadcasting in the UK; Amazon has won the UK tennis rights to the ATP World Tour from Sky. This is the first major live TV sports rights deal for Amazon outside the US and potentially signals that an already competitive market is about to intensify, pitching traditional broadcasters against well-funded digital entrants.

Amazon is also taking Google and Facebook to task as it moves to press in on advertising. Amazon has been courting ad agencies, offering a search and programmatic proposition that includes Amazon’s Echo personal assistant and Prime Video. Amazon's trump card is data. While Facebook knows who people are, Google knows what people search for, only Amazon actually knows what people purchase. 55% percent of online shoppers in the U.S. start their product searches on Amazon. If Amazon can leverage this data, it could become an advertising powerhouse. 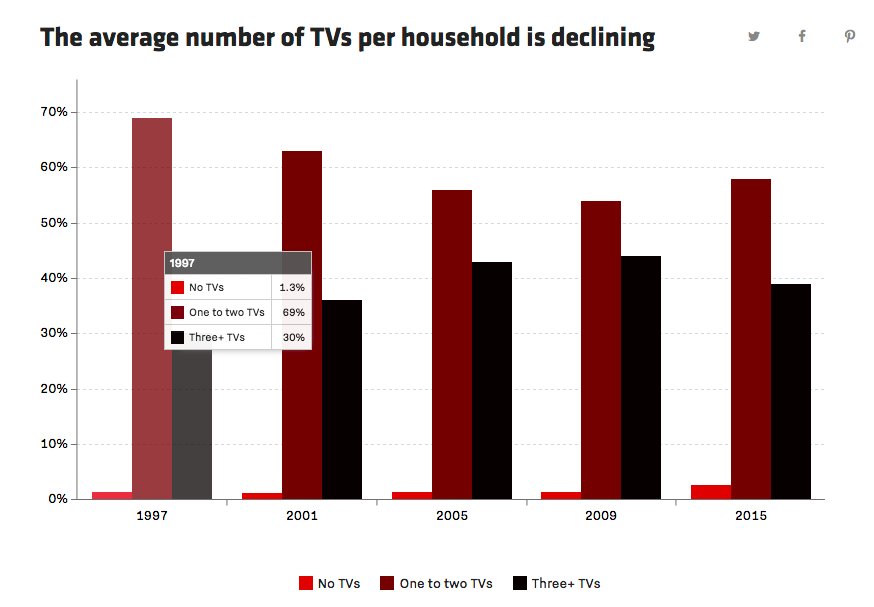 TV sets are starting to disappear from American homes

Energy Information Administration report that the number of TVs per household is on the progressive decline. This really isn't much of a surprise given that smartphone usage now beats TV among young adults in the U.S., Nielsen reports.

However what is noteworthy is that the fall in TV sets seems to equate to the fall in live TV and DVR viewership. This is bad news for broadcasters.

At Rerun, we wonder what the usage of TV apps and casting devices might now be on TV sets? Perhaps instead of taking a cable subscription users are picking and choosing their live TV by using the broadcasters own apps.

How CBS News is trying to reinvent itself

Build an always-on news brand that doesn’t fall into the trappings of endless cable news shout-a-thons on one end and cheap, forgettable social news clips on the other.

Just like CNN's Great Big Story, CBS has been busy reimagining its news output for digital-first generations with CBSN, its OTT news channel.

This is a smart move by CBS to future proof their core business by creating an offering tailored to younger audiences. The average age of a CBS News linear TV viewer is 59. 3 years in, CBSN is doing a great job - it's now profitable, and in 2016, it reported over 240 million live streams, up 232 % on 2015.

A collaborative effort between channels and departments, CBSN has cleverly leveraged the existing brand equity of CBS News to drive an audience for CBSN. They've also crafted a news experience that's different to linear and tailored to OTT and social platforms.

Video stories that perform well on social often influence editorial decisions for programming on the streaming channel. CBSN has the air time to devote to deeper dive documentaries on stories that are underreported on linear, and the space to grow new talent that properly represents its audience.

Cheddar, a self-titled 'Post-Cable Network' is a financial news broadcaster that started on Facebook Live and has since extended to cover several OTT and on-demand services. It broadcasts live from the NYSE floor and has garnered a young and affluent audience. Now Cheddar is turning its attention to local coverage.

The new initiative, called Cheddar Local, offers TV stations one- to two-minute market updates each day on a taped and live basis [...] Cheddar gets exposure to large audiences in local news markets, and local TV stations get high-end business and tech coverage from the heart of the New York Stock Exchange.

At Rerun, we're both delighted and worried by the possibilities of this technology. If used for good, personalised voice recognition could significantly improve content recommendations.

The command 'Show me something funny' could display results based on your own personal sense of humour (and not just the latest Adam Sandler movie content providers want you to watch).

If multiple voices could be recognised simultaneously, then shows that you might enjoy watching with your kids or significant other could be served up at the appropriate moments and cut down on time spent deciding what to watch next.

On the flip side, knowing who someone is just by hearing their voice could be a way to capture data without their permission, from the context of conversations, or who they're spending their time with.

It's all very Black Mirror!

Much like with AI, it's almost impossible to comprehend the ways in which AR will transform our society right now. Apple's release of ARKit just two months ago has given developers access to all the tools they need to start prototyping ideas, and as this blog shows the potential is simply staggering. Many comparisons between AR and VR have used immersion as a distinguishing factor, citing VR as the more immersive of the two. But as the AR 'Take On Me' experiment shows, AR can be every bit as immersive.

There's a long way to go before it's as simple as putting on a standard-sized pair of glasses, but it's not too early to start letting your imagination run wild!

Intel and MLB have recently teamed up to broadcast a live VR feed of America's favourite pastime. Viewers got to take their pick from different vantage points around San Francisco's AT&T Park. All streamed live into their VR headsets.

VR technology just isn't advanced enough yet to compete with the traditional TV broadcast. But with improving headsets and tech that enhances that viewing experience, we think VR and live broadcasting have a promising future together.

It's been 14 years since Second Life launched. For those unfamiliar or too young to remember, it's a 3D world in which players come together to create, converse, and even trade in virtual property. In the last few days, Linden Lab (the company behind Second Life) has released a public beta of a new VR world with the same concept.

They've been busy building hundreds of experiences inside the world which range from narrative games to virtual museums. It's unclear how popular Sansar will be. Another company called AltspaceVR has already tried and failed to make an impact using VR in this way, possibly due to a slower-than-expected uptake of the technology. However, Linden Lab may prove to have the experience and an already existing backlog of content to make it a success.

Kenan Thompson, the longest running SNL cast member who brought us 'Kenan and Kel', is back with a new series for kids. Skoogle will feature Thompson as the personality behind a voice-activated digital assistant. Built by kid entrepreneurs, to solve kids' problems. The show aims to encourage entrepreneurism in kids, and is another sign of voice as the interface of the (very near) future.

This marks the first major production for pocket.watch, a new digital media startup out of LA. Keep an eye out for Skoogle coming soon to streaming, cable, and broadcast networks.