Happy Friday and welcome to Rerun!

This week saw the long-awaited official reveal of YouTube TV. It's arguably the most compelling skinny bundle yet, and you can read all about it below 👇

Today YouTube is the biggest online destination for video, with people watching more than 1 billion hours of video each day. Now YouTube is getting into the TV subscription space. With such a move it proves that 'a la carte' viewing is the unavoidable future of television subscriptions.

YouTube's offering is the first skinny bundle service that has each of the Big 4 networks: ABC, CBS, NBC, and FOX. In addition, their package has a more thorough coverage of sports, news, TV shows, and kids shows than their competitors.

At Rerun we wonder can YouTube encourage Millennials to purchase a subscription? There is already a lot of competition in the market with Sling, DirectTV Now, Sony Playstation Vue, and the soon-to-be-launched Hulu pay-TV, all vying for a piece of the Millennial pie. YouTube, as TV[R]EV point out, are assuming Millennials will actually pay to watch TV. Millennials are well known for finding roundabout ways to access the content they want, when they want.

So how big is the Millennial TV market? And with so many already in the market, are YouTube and its competitors in danger of cannibalising each other? 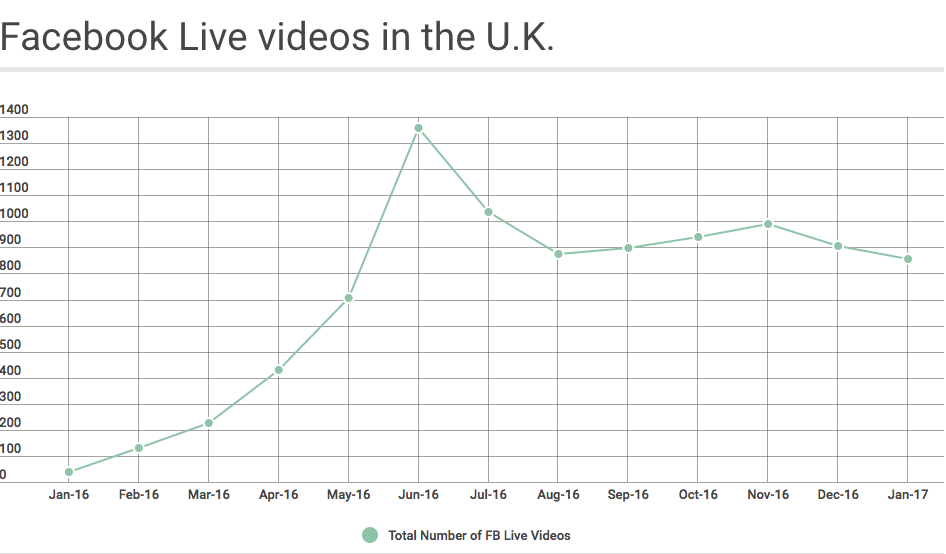 The number of Facebook Live videos produced by UK media publishers has flatlined over the past six months, according to recent SocialBakers data. Analysts and publishers are actually expecting a drop in 2017 as Facebook incentives dry up.

Will Hayward, CEO of JOE Media, says that at the end of the day Facebook only cares about its own revenue and user experience. Live stunts like Buzzfeed's exploding watermelon may garner short-term views, but the long-term strategy has to be in premium, lean-back content. This much is evident in the mounting rumours about a Facebook TV app.

“Legacy media businesses are more of a slave to Facebook,” Hayward added. “It’s that sense of panic and chasing the latest feature rather than looking at the long term. Publishers who are not focused on the long term will abandon Live.”

The promise of 5G is still years away

The reality of 5G for users is a long way off, as Brian Heater explains. While the likes of Ericsson & Intel work to bring the technology to fruition, it seems the industry at large only understands 5G as something “beyond the smartphone”.

The problem is that everyone’s gotten so caught up in this sci-fi, flying robots, one-millisecond latency story that the actual real-world questions around 5G seem to have gotten lost in the rush,” according to Disruptive Analysis founder Dean Bubley.

Much of the hype as Heater explains isn't aimed at consumers but is focused on encouraging massive infrastructural investments from technology firms who intend to use 5G. At Rerun, we think this raises an important question - if technology firms aren't even sure what 5G will do, how can they cater and develop for it?

As Heater wisely points out the road to 5G enabled technology and devices 'will be paved with transitional, rather than transformational technologies'.

CNN Chief Jeff Zucker is taking his battle for TV news dominance online with a strategy to compete with Vice and BuzzFeed.

As part of this plan, Zucker aims to connect with younger audiences by launching stand-alone companies that have their own independent digital identities. The first of these is Great Big Story, created in 2015 as a source for video storytelling. The pieces Great Big story create are high brow videos that give alternative glimpses into people's lives and places. Such content appeals to values and themes of not just millennials, but wider audiences also.

'In the era of social networks and mobile streaming, he knows that digital is where younger viewers — and growth — will come from.'

For Zucker, CNN is much more than a news channel or a political punch bag for President Donald Trump. CNN gives its audiences bright and innovate digital pathways to engage in current affairs and content.

Popularity of Sony’s PlayStation VR surprises even the company

In contrast to most high end VR headsets, PlayStation VR has exceeded its own sales expectations, selling an impressive 915,000 units in its first four months.

So what’s driving this adoption? A pre-built audience of PS4 owners helps. Unlike the Oculus or HTC Vive, there’s no need to buy a super computer to power the headset if you already have a PS4.

Although the number of PS4 games available for VR is still fairly low, Capcom’s recent release of Resident Evil 7 for VR has made a big impact - doubling the amount of time Playstation VR users spend playing.

It seems content is king in VR gaming just as much as it is in OTT.

The sales figure is a positive sign for virtual reality and probably establishes Sony as the leader in the premium side of the market — headsets connected to PCs and game consoles that provide more immersive experiences than are currently possible through inexpensive headsets that use smartphones for visuals.

Unreal Engine is behind the most visually and technically impressive games on the market, which makes it perfectly suited to demanding use cases like VR and VFX. This week they revealed some features of their VR Editor, which lets you create interactive 3D environments while in VR. Why is this important? It brings productivity boosts to experienced developers while at the same time making 3D more accessible to beginners.

They've also worked with Pixar to hook it up to Pixar's open-source USD graphics pipeline. This is exciting for the film industry and animators, who could have the ability to step inside a CG sequence. Indeed while filming Star Wars: Rogue One, director Gareth Edwards used VR to help frame shots that relied on CG, all while live in the studio.

Why LG's VR headset could be the best yet

Announcing its VR headset, which Sean Hollister at CNET likens to HTC’S Vive, LG's could be a healthy competitor to what he terms as the “gold standard” of VR headsets. The overall experience—the comfort of the headset, the controls, the display—is a step in the right direction for LG, according to Hollister.

Forbes reports that this week at GDC 2017 Windows announced Windows Mixed Reality: a rename of a previously rumoured project to create VR headsets capable of mixed reality with the Windows 10 Creators Update. Microsoft revealed an Acer headset at the San Francisco gaming conference, which is available to developers this month for $299.

The fact that virtual reality is coming to the Xbox platform will no doubt thrill more users than the idea of a headset powered by Windows 10. However, Microsoft is putting more resources into what it calls "mixed reality", with Alex Kipman of Microsoft making reference to 'Project Scorpio', the codename for the next Xbox One model, capable of true 4K gaming, high-end virtual reality and HDR content.

Both Microsoft and LG, clearly, have some catching up to do with Google and Sony who are making strides in VR, but the landscape for headsets and devices is rapidly changing, bringing more variety and choice for users.

Screens of the future

The technology behind “flexible displays, shape-shifting materials, and context-aware functionality” is advancing quickly. Here you can see virtual examples of how animals, such as fish, or clothing items, such as hats, could be used as screens.

The applications for this technology are endless. Think: a flexible display projecting next to your food on your plate, telling you its nutritional value. Or: cyclists or race cars showing their speed, fuel level, and other metrics as they whizz by spectators. But most of all: